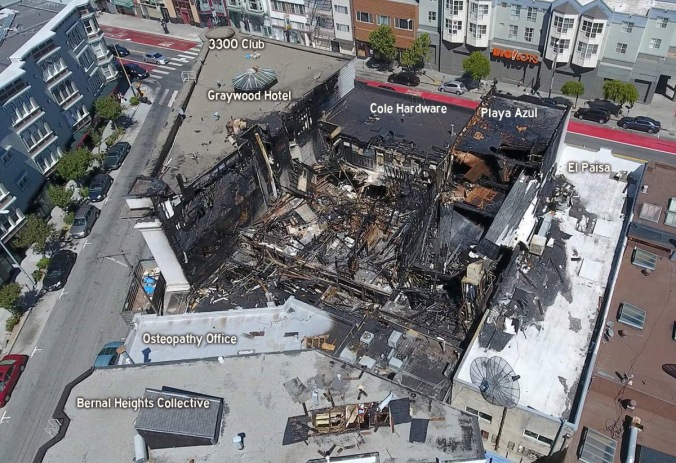 We are at a point in this crisis where reasonable people now believe that arson is playing a part in the rash of fires that are destroying the homes of Mission and Bernal residents. Reasonable people see that fires in low-income buildings almost always result in large profits for building owners and landlords and are disturbed and afraid the uptick in fires is more then just a coincidence.

As the elected representative of these neighborhoods, there is nothing I want more then to assure my constituents that arson is not a factor in these fires. Unfortunately, at this point, I can not say this with certainty.

It’s true: A disconcerting number people believe that arson was the cause of the Cole Hardware fire. It’s also true that many seemingly reasonable people believe Lee Harvey Oswald didn’t act alone, that fluoridated water is part of a communist plot to overthrow the free-enterprise system, and that space aliens sometimes capture humans for use in strange medical experiments involving deep-penetrating probes. Belief in an unsubstantiated theory is not the same as engaging with reality on the basis of evidence and facts, and Supervisor Campos brings no new facts to our understanding of what caused the Cole Hardware Fire.

Both in public and privately, investigators from the San Francisco Fire Department say there is currently no evidence to suggest that the Cole Hardware Fire was caused by arson or foul play. While the precise cause of the fire remains unknown, investigators have concluded the blaze started somewhere in the Cole Hardware Building, at around 2:15 pm on Saturday, June 18. That’s a busy time for shoppers at Cole Hardware, and an exceptionally risky time to commit arson — assuming you don’t also seek to simultaneously commit homicide.

Another fact: Fire investigators say the building next to Cole Hardware on the north side — the one on the corner of 29th that’s home to the Graywood Hotel SRO and the beloved 3300 Club — had no outstanding fire code violations or complaints. It was also equipped with functioning alarm and sprinkler systems, both of which activated during the fire.  The result is that the City says the building remains structurally sound, even now.

Shukry Lama, a co-owner of the 3300 Club, credits the sprinklers with saving the building and his business. “I got to see the third floor, and the sprinklers and firewall really saved us,” Shukry says. “The top of the southwest wall was badly scorched, but the fire damage stopped at the sprinklers. We were on the far side of the building, so our damage was just water, but everyone said the building is completely salvageable.”

Thanks to the sprinkler system, the tenants who lived in the Graywood Hotel may eventually be able to return home. That’s a fact. It’s also a fact that Supervisor Campos has thus far declined to support the mandatory installation of sprinkler systems in older, multi-unit residential buildings.

In April 2016  Supervisor Campos held an event on the corner of Mission and 22nd Street — the site of a previous multi-unit residential fire — to announce his plan to introduce legislation aimed at reducing fire-related displacement in San Francisco. In his Examiner essay last week, he reminded us of this:

My office will soon have reached the limits of the powers given to us by the charter of the City of San Francisco to address these fires. Over a year ago we legislated the creation of an Interagency Fire Taskforce and drafted legislation to increase the audibility of fire alarms, update fire alarm technology, improve smoke alarm access and ensure that landlords provide tenants with critical information after a fire.

What’s missing from the list?  KQED highlights what Campos left out:

In April 2015, a Board of Supervisors committee held a hearing to look at ways to install sprinklers in more of the city’s older apartment buildings. During that hearing, fire officials released data showing that five out of every six buildings damaged by fire between 2010 and 2015 had no sprinkler systems.

“The data shows that sprinklers absolutely save lives,” Kim said at the time.

The S.F. Apartment Association has opposed any attempt to require retrofitting the city’s older buildings with sprinklers, citing the expense and a long list of logistical issues. Instead, the association proposed improved education for tenants on the use of fire extinguishers and fire escapes.

In December, when a six-member group made up of members of four city agencies released its recommendations, it did not include suggestions on sprinklers. Neither does Campos’ proposal.

KQED also reported “The San Francisco Apartment Association, a group that represents many landlords in the city, worked with Campos on the legislation.” 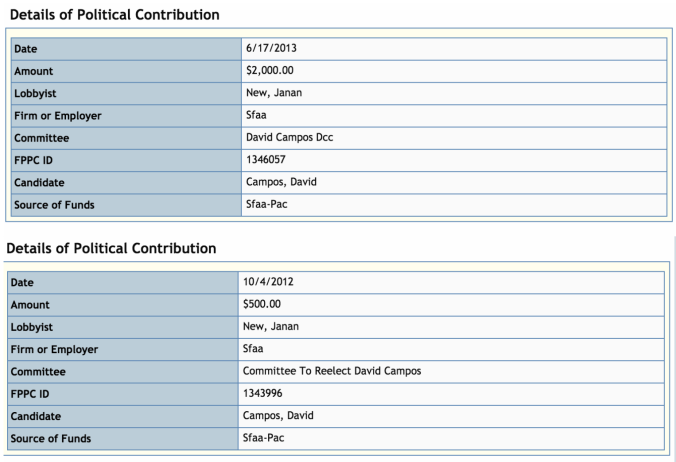 To be sure, installing retrofit sprinklers is expensive. Very expensive. The 2016 Fire Safety Task Force Final Report outlines the magnitude of these costs in detail, and shares the perspective that “property owners are concerned with the expense of retroactively installing sprinkler systems to existing buildings and the cost to relocate tenants during such installation.”

That’s totally legit. Sprinklers retrofits are expensive, and it would be onerous to impose the full burden of retrofit mandate costs upon property owners. A forward-looking retrofit proposal should include mechanisms to make public funds available to property owners seeking to comply with a sprinkler mandate. Crafting such a proposal would take vision, leadership, a talent for negotiation, and intense attention to detail.  David Campos tells Bernalwood he has a plan for sprinkler retrofits, and it looks like this:

If that sounds rather noncommittal and less-than-encouraging to you, that’s because it is. Yes, it’s hard work to develop real solutions to help prevent long-term displacement caused by fires in old, multi-unit buildings. So our Supervisor finds it easier to pass the buck and speculate about things that may be “more then [sic] just a coincidence.”

Supervisor Campos seems to be in no hurry to develop a sprinkler retrofit program, and because of term limits, his time on the Board of Supervisors is quickly coming to a close. That means the challenge of reducing fire-related tenant displacement in our district will soon fall upon his successor. To learn where they stand on the sprinkler retrofit issue, Bernalwood reached out to the two leading D9 Supervisor candidates, Hillary Ronen and Joshua Arce,  for comment.

I’m definitely for sprinkler retrofits, but the kinds of concerns I have are to make sure costs aren’t transferred to tenants in a way that will result in people being displaced. The costs are quite significant. That’s what we need to figure out — who pays? Is it building owners, or funds the city provides? But what we don’t want is for the costs to be passed along to tenants who can’t afford them. Sprinklers are an important part of addressing these horrendous fires.

Now is the time for all of us to work together to develop a sprinkler ordinance that I will introduce on the same day that I am sworn in as District 9 Supervisor, one that requires fire sprinkler systems on buildings most vulnerable to this type of catastrophe. We will start with wood frame apartment buildings in and around the Mission, safeguarding the tenancies of low-income renters while addressing the economic impact on property owners with programs that are already available in other cities but have not been considered here.

I’ve already had the chance to sit down with tenant, housing, property owner, public safety, and labor representatives to draw lessons from the efforts to pass the successful 2001 SRO Sprinkler Ordinance that proved to be effective at 29th and Mission.

There is clearly a path forward. We’ve done it before with respect to SRO’s and let’s do it again before the status quo results in yet another tragic fire that destroys lives and threatens residents and family businesses with long-term displacement.

So there you have it: Real facts about what we can do to help protect the future of San Franciscans who live in older wooden buildings. Oh, and while it may just be nothing more than just a coincidence, there was an article in the San Francisco Examiner this week about a fire that broke out Tuesday afternoon at an SRO-style building in the Tenderloin:

Fire officials said the fire took place in a fifth-floor unit at 519 Ellis St. The Senator Hotel, a supportive housing development, is located at that address.

According to police, the fire began when a tenant lit several items in his room on fire, causing the room and building to catch fire.

Fire department spokesman Jonathan Baxter said the fire was put out by sprinklers before firefighters arrived on scene and it did not spread beyond the room where it started.

The fire caused moderate damage and was reported under control at 4:48 p.m., according to Baxter. No injuries were reported.

PHOTO: Aerial view of the fire scene, showing the structurally intact Graywood Hotel building, which was protected by a sprinkler system. Image via video screenshot, courtesy of Alan Musselman