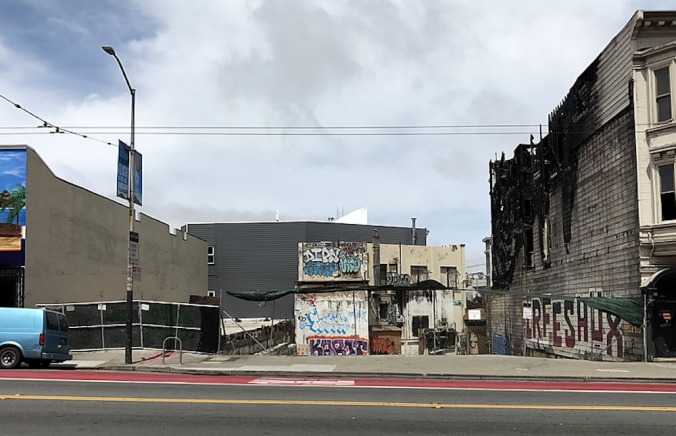 Last week, Bernal Heights neighbors rejoiced at the news that plans were in the works to build eight new apartments atop a revived Cole Hardware store on the now-vacant lot at 3310-3312 Mission Street where a devastating fire destroyed the original Cole Hardware one year ago, on June 18, 2016.

Today, however, the fate of the project has been thrown into doubt, as the proposal is likely to become mired in the planning and permitting morass that has done much to perpetuate San Francisco’s ongoing housing shortage and affordability crisis.

Under the original proposal reported by SocketSite last week, plans have been submitted to create eight market-rate homes in a new five-story building at 3310-3312 Mission Street. The ground floor of the building would include 6000 square-feet of commercial space. Reporting by Bernalwood revealed that Cole Hardware owner Rick Karp is collaborating with the owner of the property, with an eye toward re-opening the much-loved, much-lamented Cole Hardware store in the new building.

Architect Earle Weiss has filed plans with The City to build eight condos over two stories of commercial space. Before the fire, there were seven residential units above Cole Hardware.

“We are in conversation with the property owner,” Karp said. “The retail space we’re designing with him with the intent of Cole Hardware opening.”

Ronen said she would like for Cole Hardware to reopen, but also hoped the site would be used for 100 percent affordable housing.

Regardless, Supervisor Ronen’s comments suggest that the approval and permitting process for the building is likely to be long and acrimonious if Ronen and her allies oppose the otherwise code-compliant project at each of the many steps along the way.

Cole Hardware wants to come back to Mission Street, but at the moment there’s no reason to believe that is going to happen anytime soon.

PHOTO: The burned out lot at 3310-3312 Mission, where Cole Hardware once stood. Photo via SocketSite.