“This is a really good focus group.”

During the meeting, more than a dozen Bernal Heights residents took turns scolding SFMTA for failing to provide timely information to local residents, repeatedly contradicting or redefining its own data about non-resident parking in Bernal Heights, and arbitrarily changing the rules that  will govern the proposed RPP in northwest Bernal.

The net result, as one Bernal resident pointed out, is that “[SFMTA is] pitting streets against each other, and neighbor a against neighbor.”

That was a recurring theme throughout the evening, as Bernal neighbors who both supported and opposed the parking plan described how the RPP program seems to have been designed from the outset to fuel neighbor-on-neighbor antagonism.

Quite rationally, neighbors who want RPP in northwest Bernal are thrilled that SFMTA seems determined to make the new permit parking zone happen, regardless how much the agency botched the process along the way.  Meanwhile, Bernal neighbors who either oppose the RPP zone, or who live on streets just outside of it, or who never ever heard about it at all because SFMTA failed to notify them, were told that the new zone is more or less a done deal.

“These people have more of a right to park here than those people,” explained SFMTA’s Wilson. “That’s the basis of the program.” 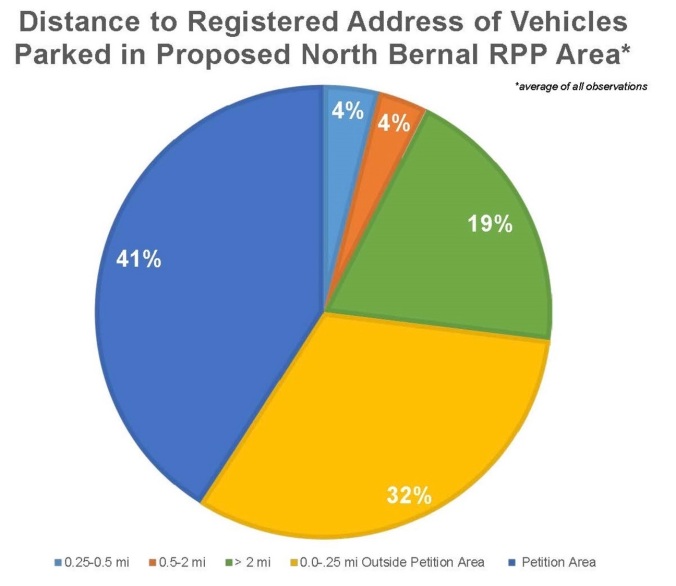 SFMTA data shows that 32% of cars that currently park on proposed RPP streets belong to other Bernal residents living within 1/4 mile. (Source: SFMTA)

And so, on that cheerful note, what’s next for the Northwest Bernal RPP?

In a strange concession to SFMTA’s mismanagement of the Bernal RPP process, Wilson said that the agency has re-opened the petitions used to determine whether or not individual streets will be included in the northwest Bernal RPP.

SFMTA’s rule is that at least 50% of the households on each block must sign the petition to be included in the RPP zone.  Yet because SFTMA decided to reduce the maximum permit allocations from four permits per RPP household to two after the original petitions were submitted, Wilson said the petitions would be re-opened until May 17.

That means residents who previously voted yes on the RPP proposal, but who now disapprove of the proposed change, could use this opportunity to change their votes from Yes to No.

Meanwhile, Wilson said, northwest Bernal residents who previously voted No, or didn’t vote at all, now have until May 17 to sign the petition to get their street included in the new RPP.

If at this point you’re wondering, “Since SFMTA seems hell-bent on on implementing the northwest Bernal RPP, who would possibly vote now to remove their own street from the RPP zone?” — well, you’re right to wonder that. At this point, simple self-interest dictates that keeping your street in the new RPP is the rational thing to do. (cf. The Prisoner’s Dilemma)

And likewise, if you previously voted No to the RPP, but would now like to change your vote to Yes, well, that’s also a very rational thing to do, because who wants to live on a non-RPP block right next to a street that’s part of the RPP program? When the RPP program is implemented in northwest Bernal, parking on streets included in the RPP zone may or may not get easier. But it’s quite certain that the establishment of the new RPP zone will make parking on non-RPP streets nearby significantly more difficult.  (cf. The Prisoner’s Dilemma)

Of course, if you didn’t attend Hank Wilson’s community meeting on April 19, you probably wouldn’t know any of this.  To date, SFMTA hasn’t sent out postcards to northwest Bernal residents informing them of the re-opened petition, and SFMTA’s Northwest Bernal Heights Parking Pilot website hasn’t been updated to explain the outcome of last week’s community meeting or to indicate the new petition deadline.

Sometime after May 17, SFMTA will release the tallies of the re-re-revised block-by-block petitions. With the final list of RPP blocks in hand, SFMTA will then push the northwest Bernal RPP proposal through the legislative process.

Because SFMTA is treating northwest Bernal RPP as an experiment,  it will require approval by the full SFMTA board of directors as a calendar item at an upcoming SFMTA board meeting (exact date TBD).  By all indications, this is likely to be a rubber-stamp gesture; Hank Wilson told the crowd at his Bernal Heights community meeting that he has never heard of an instance where the SFMTA board voted against an RPP proposal.