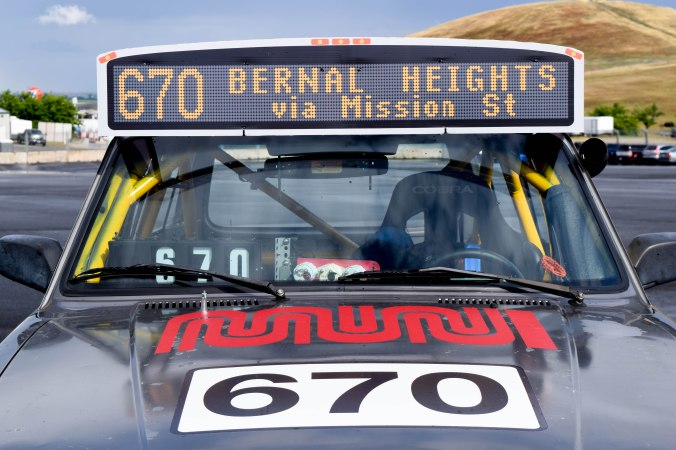 There’s been a lot of controversy lately about new schemes to improve the quality of our local public transit service. Some say we need to make Muni faster, so buses become more attractive to would-be riders. Others say we need to respect automobile drivers, for whom the car is still an essential way to get around. Both approaches have pros and cons, but when those petroleum-huffing papas from the Bernal Dads Racing Team looked at the problem, they saw an opportunity to deliver a big win-win for both transit riders and motorists.

The Dads started by taking a family-friendly car, and turning it into a bus. Then, to hasten the commute, they added horsepower — lots and lots of horsepower. The result is what you see here: A 1992 Volvo 240 station wagon that’s been repowered with a higher-output BMW M52 engine and converted into a Muni bus.

Designed to upgrade the quality of service on Muni’s existing 67 Bernal Heights Line, Bus 670 was built to provide super-express service between Bernal Heights and downtown San Francisco. Before entering regular service, however, the Bernal Dads took the vehicle to Thunderhill Raceway last weekend to conduct high-speed endurance testing under live race conditions in a 24 Hours of LeMons competition.

At first, the judges at 24 Hours of LeMons judges expressed some concern about the authenticity of Bus 670 because, they said, it did not sufficiently reek of piss, vomit, or feces. Nevertheless they determined that all of the vehicle’ safety equipment was in order, including the rear-facing “Stop Requested” sign that engages in tandem with the rear brake lights. 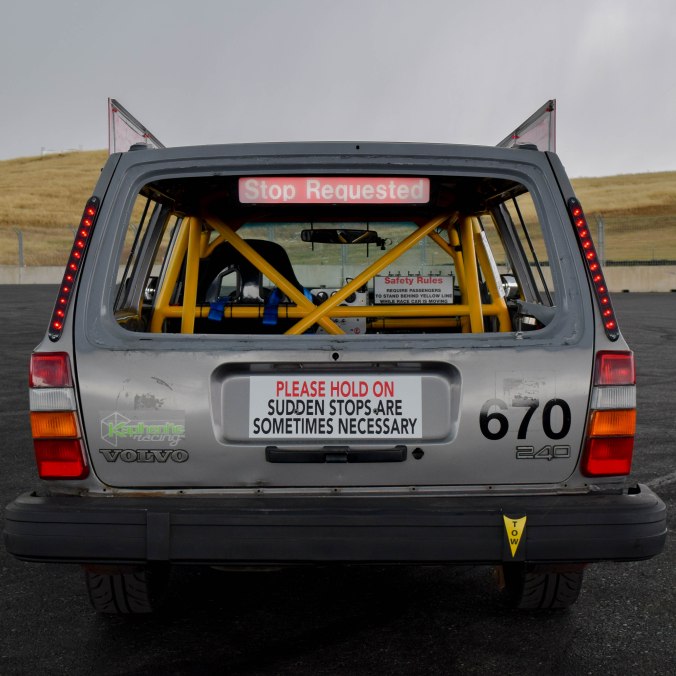 When the green flag came out, Bus 670 quickly validated its basic design concept. With the BMW motor installed where an anemic Volvo engine used to sit, Bus 670  became a formidable competitor in heavy traffic — with no “red carpets” required:

However, in classic Muni style, Bus 670 did experience some teething pains. After about  two hours on the track, the clutch failed. Bus 670 was returned to the yard, and a team of ace mechanics quickly set to work on repairs.

Eight hours (and a complete engine removal and reinstallation) later, Bus 670 was ready to return to duty:

With the new clutch in place, 670 performed flawlessly during seven continuous hours of express service on Sunday:

Of course, like the signs say, your picture and voice may be recorded on any contemporary Muni vehicle, and Bus 670 is no exception. Here’s a 360 Video of your Bernalwood editor taking a lap around the track:

… and this video gives a sense of how nimble Bus 670 can be in brutal traffic:

All told, this trial run of Bus 670 was a huge success.

The Bernal Dads Racing Team estimates Bus 670 has the potential to transport commuters from Pinhole Coffee on Cortland Avenue to the Ferry Building downtown in five minutes or less with limited-access traffic controls. To verify this, the Bernal Dads look forward to strapping SFMTA Director of Transportation Ed Reiskin into the rear passenger compartment for a high-speed proving run.  Just remember our motto, Mr. Reiskin: “Information gladly given, but safety requires avoiding unnecessary conversation.”