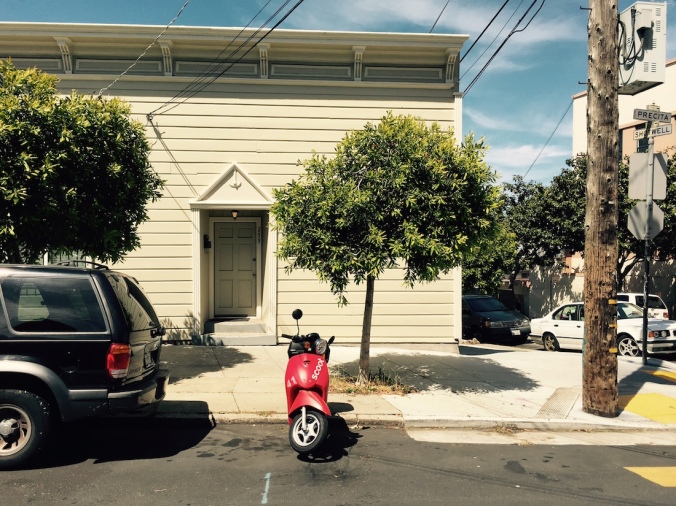 Your Bernalwood editor has been on the receiving end of a steady stream of grumblings about Scoot Networks, the scooter-sharing startup with sharing locations in Bernal Heights. We wrote about Scoot for the first time last August, but since then the company has expanded its reach in Bernal — and the grumblings have expanded with it.

Here’s one from Neighbor Adele:

Are you thinking of offering any more coverage on the ‘Scoot’ fleet taking up street parking issue? I am actually a daily bicycle commuter so I’m not the worlds biggest parking advocate, but I actually get a serious sense of unease and frustration seeing branded scooters from a private fleet blanketing my street (Folsom near Bessie). They are all over, and to be clear, they are taking up all manner of spots. It just feels like another part of the Airbnb-ification of the neighborhood. I don’t see this precedent from car sharing companies. Obviously public entities have a major role in PLANNING the extension of the much more innocuous bicycle shares into new locations. Is it too much to ask for some planning to go into the extension of private, for-profit transit systems into our residential neighborhood?

Like Neighbor Adele, your Bernalwood editor does not require street parking, so I have no personal reason to begrudge Scoot’s presence.

Unlike Neighbor Adele, your Bernalwood editor doesn’t really mind if private companies use public space once in a while. Private companies have contracted to use public space to do all sorts of things since pretty much forever, and so long as these arrangements are properly authorized and generally serve the public interest, then I think that’s fair play.

Yet it’s easy to understand why many Bernal neighbors are frustrated by all those red scooters. Scoot Networks does not have designated parking spaces for its vehicles, and the Bernalese who use Scoot often park their shared scooters in ways that squander precious street parking space. In theory, five or six scooters can easily park in the space occupied by one car, but in practice, when five or six Scoots park haphazardly in spaces that would be a better fit for larger vehicles, neighbors end up with far fewer places to park.

Mostly, it seems that Scoot might work better with dedicated, designated scooter parking spaces. Here on glamorous Precita Avenue, for example, there are lots of odd sidewalk bulbs and short curbs between driveways where cars simply won’t fit. Those would be excellent for designated scooter-only parking. Instead, however, Scoots often park randomly, and often in the most inefficient ways possible. 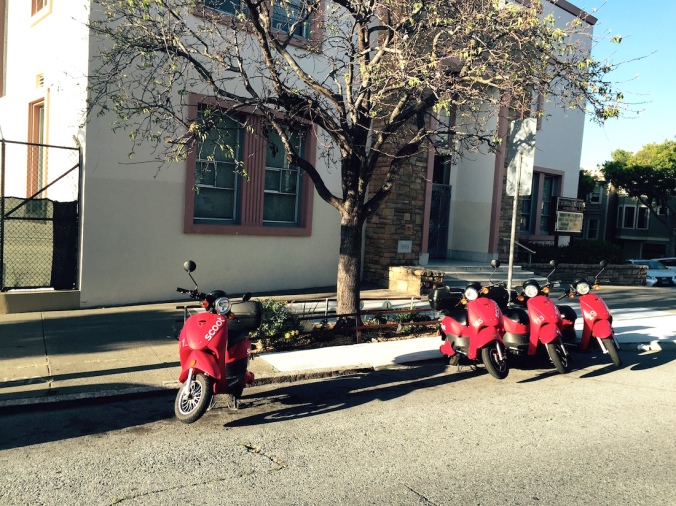 That seems like a loss for everyone. It obviously stinks for neighbors who end up with fewer places to park close to home. It probably stinks for Scoot customers, who don’t have a designated place to go find their rides. It can’t do much to help Scoot’s brand, because although the company gets good marks from customers, the current parking scheme encourages neighbors to develop the kind of festering resentment that only street-parking issues can generate. And most of all, it doesn’t help rally support for the larger cause of ridesharing, which is a very positive urban transportation alternative in our tech-enabled age.

Bummer for all of us. Scoot is a good thing, but there must be a more elegant way to integrate it into the fabric of the neighborhood.

42 thoughts on “Scooter-Sharing Scheme Is a Brilliant Idea, Executed Not So Thoughtfully”