As we all know, infrastructure is sexy.

Not the building and construction part… that’s a big honking mess. But when it’s done, infrastructure represents an investment in our collective future, which is why Bernalwood is always glad to learn about new infrastructure projects coming to our humble corner of the citysphere. Extra credit when the new infrastructure is the first of its kind.

Recently, the City unveiled a plan to build some particularly sexy new infrastructure along the La Lengua stretch of Valencia Street, between Mission and Cesar Chavez, alongside St. Luke’s Hospital. Its all part of that proposal to improve the sewer system and streetscape for that segment of Valenica, which we told you about a year ago. Well, now the design has solidified, and it includes a plan to create a Scandinavian-style raised pathway for bicycles that will be insanely cool and the first of it’s kind in San Francisco. But oddly, this completely cool new raised bikeway will only extend along part of the La Lengua stretch of Valencia Street, between Duncan and Cesar Chavez — which isn’t very big in the first place.

In other words… for one block 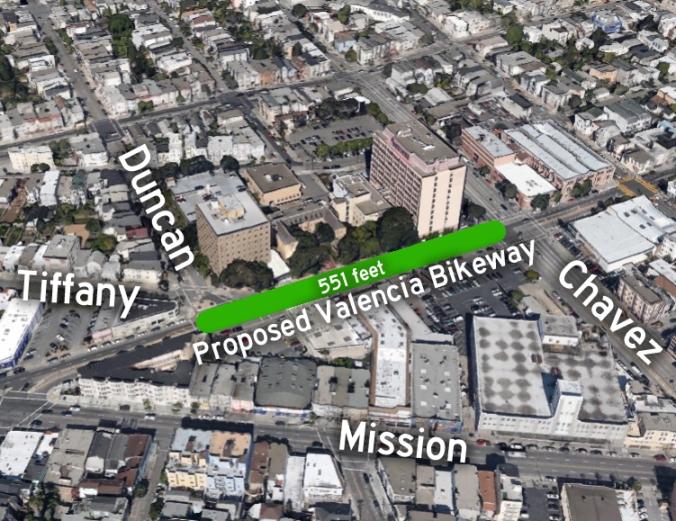 As you can see… Infrastructure! Sexy! First of its kind! The best bikeway in all of San Francisco! But just not very much of it. Hmm.

Here’s what the San Francisco Bike Coalition said about the project:

San Francisco is set to get its first raised bikeway next year! The showcase bikeway is part of the Mission/Valencia Gateway project and will stretch southbound on Valencia Street from Cesar Chavez Street to Duncan Street. This one-block bikeway heralds a completely new type of bicycle infrastructure to our city, one that will become more common in the next few years, as raised bikeways are integrated into the Masonic Avenue and 2nd Street projects.

Raised bikeways are common in great bicycling cities like Copenhagen, but relatively new in the United States. Raised bikeways create a protected bikeway without bollards or barriers, instead building the bikeway at an intermediate level between the sidewalk and roadway.Learn more about raised bikeways and see designs here.

The raised bikeway is an unexpected but very welcome enhancement to the Mission Valencia Green Gateway project, which wrapped up public outreach last year after three community open houses as well as feedback from hundreds of neighbors and SF Bicycle Coalition members. In addition to the raised bikeway, the final project design also includes wider sidewalks, permeable pavement and two new plazas, one at Mission and Valencia and a smaller one at Duncan and Valencia.

So when this sexy new bikeway is completed sometime in mid-2016, it may herald the beginning of a much larger elevated bikeway network that could extend… all the way across Cesar Chavez! Someday! Or maybe it will even extend all the way to the fabled Southern Crossing. Someday!

In the meantime, come mid-2016, if you want to make the new bikeway feel more substantial, you can simply ride back and forth along it a few times, very slowly. Go back and forth six times, and you’ll cover about a mile. Do that while listening to ABBA on your headphones, and you may even begin to feel like you’re in Scandinavia. So sexy!!!