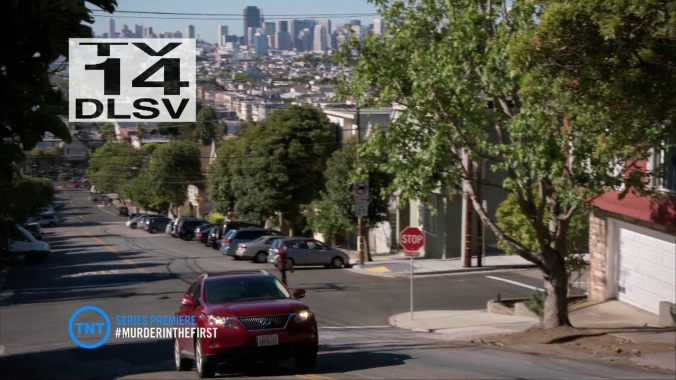 Last year around this time, Hollywood came to Bernalwood to shoot a new TV show. It finally premiered Monday night on TNT, and it’s called Murder in the First. It’s produced by Steven Bochco (Hill Street Blues, NYPD Blue, Murder One, Brooklyn South, City of Angels, LA Law, Philly, and of course, Cop Rock), so of course it’s about cops.

The pilot opens in Bernal Heights, where SFPD inspector Hildy Mulligan (Kathleen Robertson) lives in a cute little house near the top of Alabama St. with her adorable moppet of a daughter. Robertson has been in a ton of things, going back to the original Beverly Hills 90210 and earlier as a child star in Canada. Bonus Canadian content for Burrito Justice: she played Mrs. Hockey (Colleen Howe) in 2013’s “Mr. Hockey: The Gordie Howe Story.”

Neighbor Hildy, the hot blonde cop/mom (try saying it; it’s fun), is partnered with Terry (Taye Diggs), whose wife is dying from cancer. It’s pretty heavy. They’re called to a crime scene that’s meant to be a Tenderloin SRO hotel, but if you zoom and enhance, the place turns out to be regularly and frequently patrolled by the Los Angeles Police Department. Watch:

The pair do visit some real San Francisco locations as they run down leads on who killed the unsavory character in the hotel. Erich Blunt, a cartoonishly evil tech zillionaire played by Draco Malfoy with an American accent, quickly emerges as a person of interest. He is the CEO of “<APPLSN>,” which has a big campus right next to AT&T Park, and he says things like “Our apps are more than games. They are destinations where users go to get lost in alternate utopian realities.”

He also has enough money to hire one of the pilots from Wings to fly his entourage around on his private jet. But he’s probably too young to get that reference.

Meanwhile, the SFPD office where Hildy and Terry work looks like it hasn’t been painted since Harry Callahan worked there. Damn those tech company tax-break giveaways!

I won’t spoil the plot; it’s a police procedural at heart, though apparently they’re going to be spending the whole season solving one murder. (Or two, I guess. Another body does turn up by the end of the first show.) I wasn’t blown away by Murder In the First, but I’ll give it another chance next week.  The ratings were pretty good, no doubt because of all the Bernal Heights cameos.

The pilot airs a few more times this week if you want to catch it on the DVR, and it’s free on iTunes. I’ll leave you with one more glimpse of the lovely view from Alabama at Ripley. Enjoy.

Of course, real Bernal Heights moms are more savvy about their footwear: