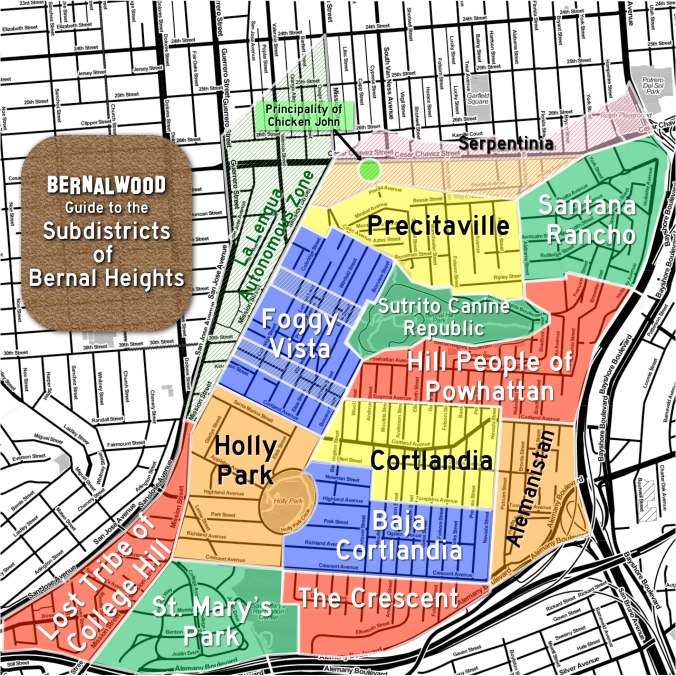 Yesterday, realtor Eileen Bermingham posted an article about the geographic subregions that exist in Bernal Heights:

Bernal Heights has many distinct areas within its neighborhood. From the hip enclave of Precita Park to the winding streets on the East Slope, the price of real estate literally varies depending upon which part of Bernal you’re in. So it’s important to lean heavily on sales in your particular part of the neighborhood when you’re accurately trying to determine property values in Bernal.

To help buyers and sellers with that task, I’ve deconstructed Bernal Heights into seven unofficial microhoods, complete with their respective price averages and low/high prices, as well as recent sales volume.

In this way, we are introduced to the comparative charms (and average home prices) of such areas as “The North West Slope,” and “Precita Park,” and “South of Cortland.” Unfortunately, it made us feel so… commodified. Ew.

That said, the idea that Bernal Heights consists of several distinct microhoods actually makes a lot of sense. After all, Bernal is a neighborhood defined by its topography — Remember, our last name is “Heights!” — so there’s an intuitive logic to the notion that different parts of the hill have very different subcultures and identities. Yet we are far more than our cost per-square-foot; we are a federation of nooks and crannies shaped by timeless geological features, historical quirks, and neighborly idiosyncrasies.

So please allow us to propose this homegrown draft guide to the Subdistricts of Bernal Heights, produced in collaboration with Burrito Justice, chief spokesblogger for the La Lenguan separatists. To wit, and roughly clockwise from the map shown above:

Precitaville – With the Mission as a front yard, Precita Park as the living room, and Bernal Hill as a backyard playground, Precitaville is perhaps the most cosmopolitan part of Bernal Heights. Perhaps.

Santana Rancho – Carlos Santana used to live here; Janis Joplin used to party here. The steep slopes and meandering streets of Bernal’s northeast corner have made it a secret haven for generations of local artists, musicians, and eccentrics.

Alemanistan – Dry, rocky, and sun-baked, Alemanistan retains a wild, untamed feel. Perched in the shadow of the Spaghetti Bowl, at the crossroads of two major highways, this  is Bernal’s frontier borderland.

Cortlandia – The heart of Bernal’s historic commercial district has now become the ideal setting for a contemporary situation comedy about bourgoise-bohemian urban culture in the early years of the 21st century. Which is funny, except that it’s also rather lovely, and we are very lucky to have it. The residents of Cortlandia are justifiably quite proud of this.

The Crescent – This area of Bernal Heights  is anchored by both Crescent Street and the Islamic Center and Mosque on the corner of Andover. So many Crescents.

St. Mary’s Park – Developed during the 1920s on the site of the former St Mary’s College campus, this self-contained, bell-shaped enclave feels like a little slice of the Sunset District, right in our own corner of Bernal Heights.

Lost Tribe of College Hill – Separated from the Bernal heartland by Mission Street, yet isolated by freeways from Glen Park, College Hill’s de facto independence is symbolized by a recent redistricting that saw the area transferred to Supervisor Scott Wiener’s District 8.

Holly Park – This ancient district of Bernal Heights is home to one of San Francisco’s oldest parks and a covered reservoir that has long been the setting for much local scandal and drama.

Foggy Vista – Rising above Mission Street on Bernal’s west slope, the groovy people who live here enjoy a commanding view of Nature’s own lava lamp: the massive banks of fog that cascade over Twin Peaks. Residents eagerly await construction of the Esmeralda Funicular to facilitate transit to and from the bustling Mission Street corridor.

La Lengua Autonomous Zone – This territory has been an integral part of the Dominion of Bernalwood since the 19th century, but today the uppity people of La Lengua enjoy limited autonomy under the terms of the 2010 Proclamation to the Vassals of La Lengua.

Serpentinia – Named after a long-gone street that used to mirror Precita on the northern side of Army/Cesar Chavez,  Serpentinia is today defined by the major thoroughfare that now slices through its center. After decades of indifference and neglect, recent  infrastructure upgrades on Chavez may bring new cultural vitality to this region.

So there you have it. Neighborly comments, suggestions, rants, and proposed revisions  are most welcome, with an eye toward future iteration of this map.

REVISION NOTE: March 20: Based on comments provided by Bernal neighbors, the former “Outer Cortlandia” was  renamed “Baja Bernal,” and then renamed again to “Baja Cortlandia.” The map has also been updated to include this change.