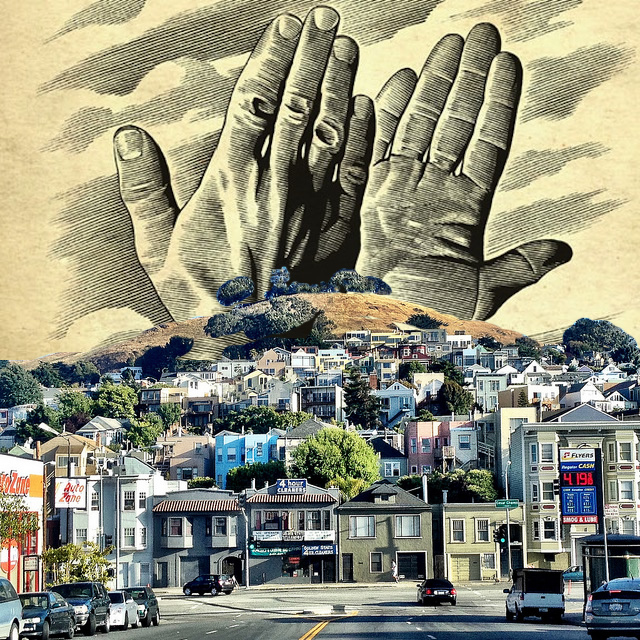 You may recall that earlier this week Bernalwood encouraged one and all to give Neighbor Markus a high-five for all the hard work he’s done recently to reinvigorate the Flickr online photo service.

Now we would also like to encourage you to give Bernal Heights writer Jon Mooallem a high-five,  for writing an authoritative and very satisfying history of… the high-five!

Neighbor Jon published his article on ESPN last month. The quick version of the story is that the high-five was invented by…

Actually, the tale is too good to ruin with a quick version. You should really read the whole article. But here’s how Neighbor Jon describes the reporting process that accompanied his history of the high-five:

I started looking into the origin of the high-five for a “live issue” of  The Magazine, produced with the folks at Pop-Up Magazine and performed on stage in New York in the spring of 2011. At the outset, the project seemed straightforward, even easy. I couldn’t have been asking a simpler question — Who invented this thing? — and I already knew a bit about [basketball player] Lamont Sleets. Or at least I thought I did. But once I started investigating, it was as if a trap door opened at the center of the story and I was sent whooshing down through it, and from there, through a dizzying system of pipes and chutes, then more pipes and chutes, until I finally looked around and realized I’d landed somewhere — somewhere that just happened to feel like a perfect ending. The other day I was talking to a journalism class and the students asked me how I went about reporting this story. I told them I had no idea.

Then, if you see Neighbor Jon, definitely give him that high-five — not only for his awesome article about the high-five, but also for his brand-new book, Wild Ones: A Sometimes Dismaying,  Weirdly Reassuring Story About Looking at People Looking at Animals in America.