At the top of every online page here at Bernalwood, there’s a tagline that says “Broadcasting from glamorous Bernal Heights, San Francisco (Elev. 433 ft.).” I certainly can’t argue with the “glamorous” part, and I didn’t have any reason to doubt the elevation… until I came across this: 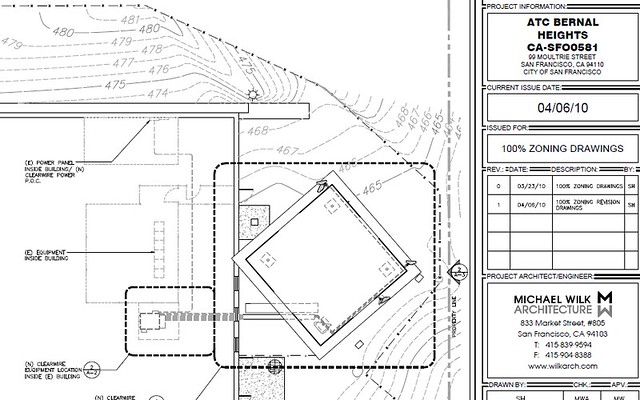 This detail comes from an architect’s report on the defunct, NIMBY-killed plan to install new wireless antennas on Sutrito Tower a couple of years ago. The contour lines in the schematic are remarkably close: one foot resolution! But what really surprised me was a detail: The highest contour line at the edge of the fence appears to be 482 feet — almost 50 feet higher than I expected.

Naturally, I put the question to Twitter, where Todd noted that Wikipedia also listed Bernal as 475+ feet. Wikipedia’s footnotes cite this TopoQuest map: 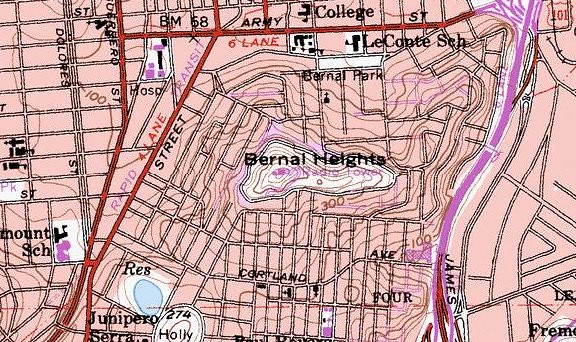 I obtained this topographic map with five-foot contours, which dates from around 196o. Sutrito Tower Bonus! It also shows the original proposal for our hilltop microwave antennas:

It’s hard to read, but the highest contour line in the 1960 map appears to be 455 feet. (That detail is shown under the footprint of the proposed building, so it’s reasonable to think it was leveled off and graded.)

There turn out to be many other figures given for the height of the Bernal Hill. The highest and lowest can both be attributed to the San Francisco Chronicle: 325 feet from the Chronicle’s book The Hills of San Francisco, 1959 (copied in the San Francisco Almanac, 1980) and  500 feet from a 2004 article. I made a graph of all the dates of the various figures I found:

This wasn’t converging on a solution, so I tried taking my iPhone and using a GPS app to find the altitude. The figure bounced around a bit, but generally stayed in the range of 430 to 450 just outside the Sutrito Tower fence, with an app-estimated accuracy of +/- 16 feet. This is consistent with a USGS report entered January 19, 1981: 443 feet, and American Tower’s 2005 survey height of 446 feet.

It’s easy to see how someone could have miscopied 443 as 433, and I see that figure serially copied into a number of lists. Prior to December, 2009, Wikipedia used 433, referenced to mountainzone.com; that was changed to “475+ feet,” referenced to TopoQuest.  Bernalwood’s tagline was created in November, 2009, and the reference came from the pre-December, 2009 Wikipedia page. (EDITOR’S NOTE: Bernalwood’s tagline will soon be revised to say 443 feet)

So where did all the erroneous figures come from? The ones that assert Bernal Hill is even taller?

Erosion wears all hills down eventually, and Bernal Hill has had some assistance from road builders and even gold miners. The phone company’s 1960 plans showed a bit of terrain still over 450, but that may have been flattened out to grade the site for building.

And what about the 2010 survey that shows ground at 480 feet? I wrote to the architect for clarification, but haven’t gotten a reply. My hunch is that the surveyor only measured local contours, came back to the office, found an old topographic map that showed a 475-foot contour at the top, and assigned the new, detailed topography to the old, pre-1960 height.

Whatever. Let’s set the record straight: We believe Bernal Hill today rises to an elevation of 443 feet.

10 thoughts on “How Tall is Bernal Hill, Really?”