Last weekend the Cub Reporter and I had the opportunity to take to the skies with the Bernalwood Air Force for a routine observation and reconnaissance flight over the Bernal Heights motherland.

The skies were clear blue, Bernal Hill was verdant green, and because it was warm out, everyone was outside to enjoy the day. We cruised over Cortland, waving imperially at our neighbors below:

We saw people walking along the northwest corner of Bernal Heights Boulevard:

Nearby, our new neighbors from the Helipad House were enjoying some sunbathing on their glamorous roof deck:

Our technocrat friends at the City Rec and Park department will probably appreciate the documentation we collected about Bernal’s ad hoc trail network, and its myriad redundancies:

Look closely, and you can almost see the analysts working feverishly inside the secret Bernalwood Command Center, located 300 feet below Sutrito Tower:

While we were airborne, we received orders over the radio to undertake an urgent new mission: An aerial survey of the La Lengua Autonomous Zone!

Researchers from the Bernalwood Intelligence Agency had identified the likely location of the La Lengua Rebel Command Compound (LaLeRebCoCo), hidden deep in the heart of La Lenguan territory, between Mission and San Jose Streets. In 3 minutes we were over the target area. We circled to take a look, and captured the money shot. Behold: 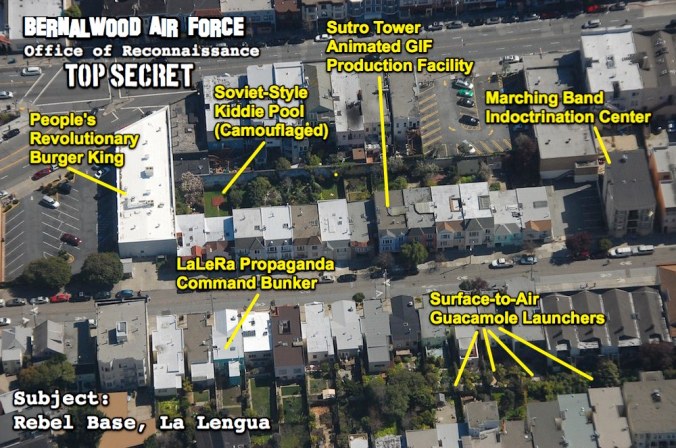 Mission Accomplished! We loitered for a few final moments to take in some unusual perspectives on Bernal Hill:

And then, saturated with happy views and a lifetime of material for goofy Photoshop image-manipulation stunts, we returned to base.

19 thoughts on “Eye in the Sky: Airborne with the Bernalwood Air Force”