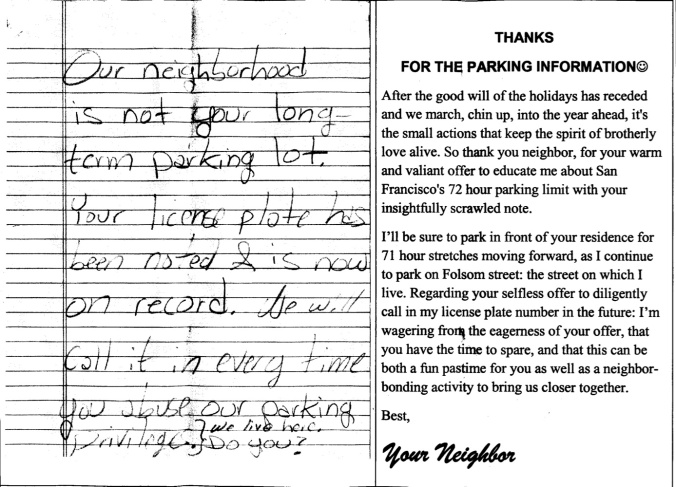 It seems that tempers are flaring on Folsom Street near Ripley, just below the entrance to Bernal Heights Park. Handbills have been slipped under doormats, and posted on telephone poles. There is much grumbling afoot.

A neighbor’s original handwritten note, shown on the left above, complained about a car which had not been moved for some unspecified period of time. The recipient’s response, neatly typed on the left, gave no ground in the quarrel, while mocking the original writer for having nothing better to do.  Meow!

To understand the issue, Bernalwood reached out to our Embedded Correspondent in the area, and we received this neighborly perspective:

This is a big problem. I know who wrote the handwritten note. He’s a wonderful neighbor and would never intentionally harm or threaten another neighbor. He’s just frustrated. The problem is bigger than it seems.

This section of Folsom is not street cleaned, and people can park here for days legally, sometimes weeks illegally, without having to move their cars. There are a handful of work trucks, second cars for folks, that live on this block.

The hostility would go away of those of us on this block were not charged with maintaining the street out front. Trash and tree debris is allowed to collect between perma-parkers and if I don’t want to see it I have to do something about it (it’s easy to argue that tree debris is not trash, but tell that to the folks who think leaf piles are rubbish heaps). Unfortunately 311 can take weeks to react to trash left near the park because of jurisdiction issues. Sweeping this block has become hobby (along with the man who wrote the handwritten note), and neighbors share their compost and trashcan space for maintenance. Apparently one neighbor is unaware of his or her neighbors’ contributions and care and has decided to make matters worse with another note.

I think this “parking war” is a misunderstanding and a waste of time. We need signage, street sweeping and no dumping to make this problem go away. Not sarcastic notes.

Equally valuable is the perspective provided by new neighbor RallyP, who moved to Bernal Heights from Boston about a year ago. Observing the controversy, Rally writes:

Alas, but what can you expect? Mired in the depths of a brutal San Francisco winter, bludgeoned by a never-ending barrage of 60+ degree sunny days, with only a rare chilly rainy evening to break the drudgery, it was only a matter time before our neighborly bonds would begin to strain.

49 thoughts on “Passive-Aggressive Scenes from the Folsom Parking Wars”