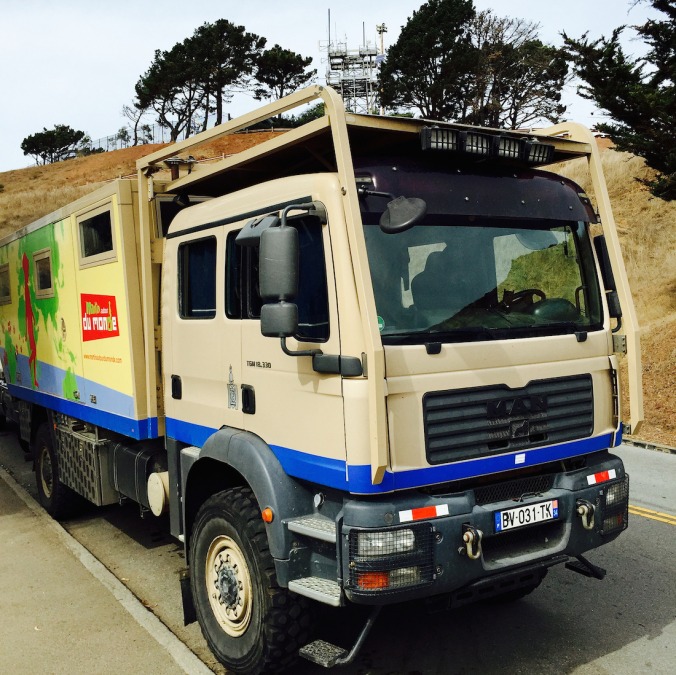 But this was no ordinary house on wheels. It was a giant-ass overland truck, equipped with four-wheel-drive and substantial cross-country modifications. Specifically, it was what’s called an expedition vehicle — the kind of thing you drive when you’re doing a road trip, say, from Morocco to India. It even had French license plates: 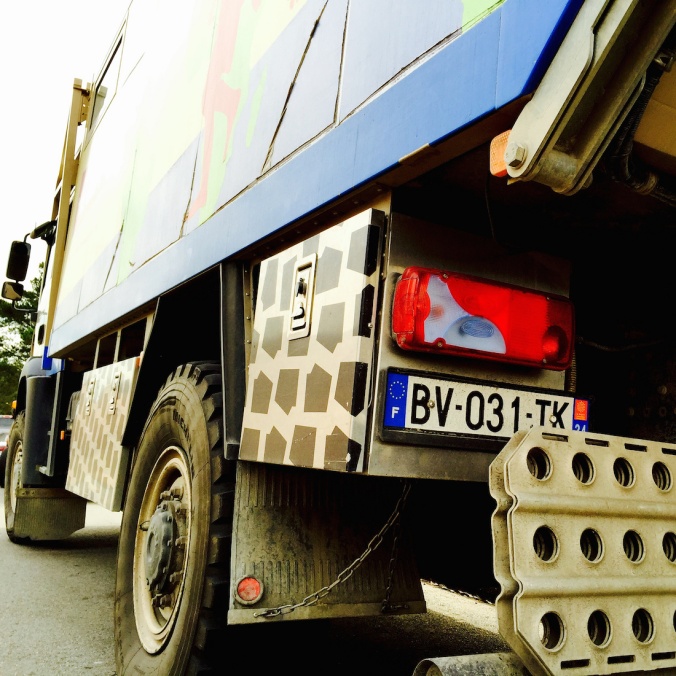 So stylish. And so clever! Our Municipal Transportation Agency does not yet have an extradition treaty with the government of France, so French license plates are a handy accessory to avoid paying San Francisco parking fines. But we digress…

The graphic on the side of the truck pointed us toward the  Martin autour du monde website: 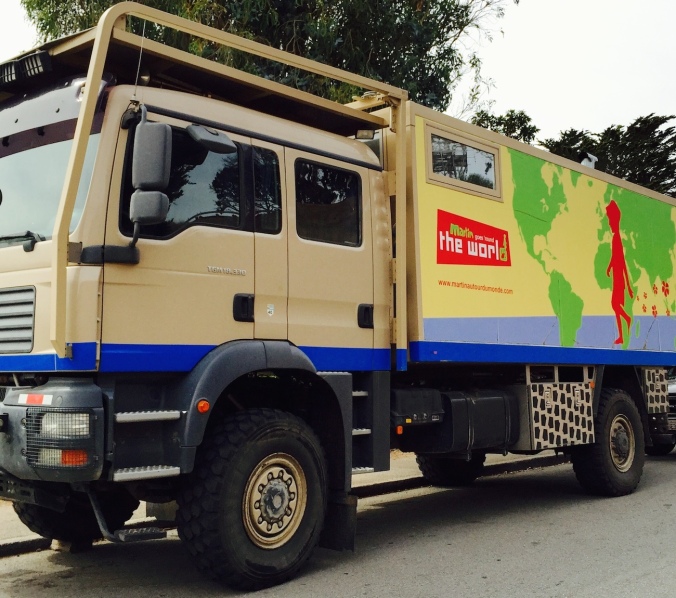 That’s where we began to unravel why this apocalypse-ready intercontinental French RV was parked on the top of Bernal Hill. The introduction video provided a mission statement (in French):

A family. A house on wheels. Five years. Five continents. The world is theirs. In search of exceptional places, they cross deserts, oceans, lakes, and towns. On all their routes, they stay close to the people.

Well, at least that’s what I think it said — my French is a little rusty. The basic idea seems to be a kind of modern-day Swiss Family Robinson, only with a French family, a badass RV, an environmental education mission, and a video production contract.

Anyway, Bernalwood also found photos of the truck that’s parked on Bernal Hill, parked in some other rather exotic places. Like this: 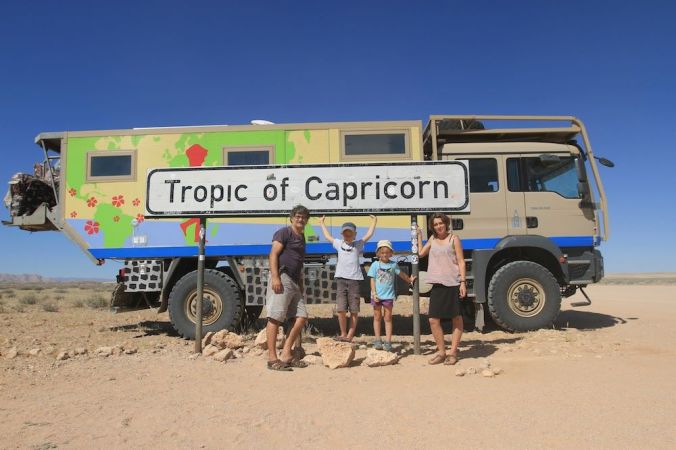 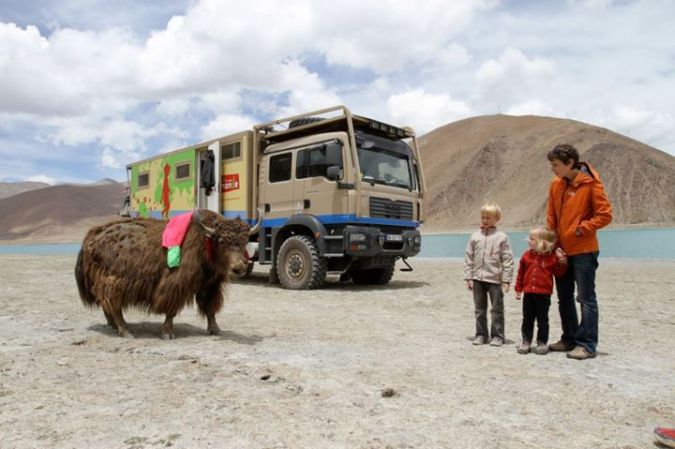 At the very least, our new French neighbors are quite good at scenic parking. It was time to welcome them to Bernal Heights.

Bernalwood knocked politely on the side of the truck. Frederic Cébron opened the door, and welcomed us inside, where we met his wife Laure, their son Martin, age 9, and daughter Chine, age 6. The interior of the vehicle looked compact, modern, and efficient, like one of those tiny IKEA display apartments they set up inside the stores.

In the back, Martin and Chine were laughing and playing: 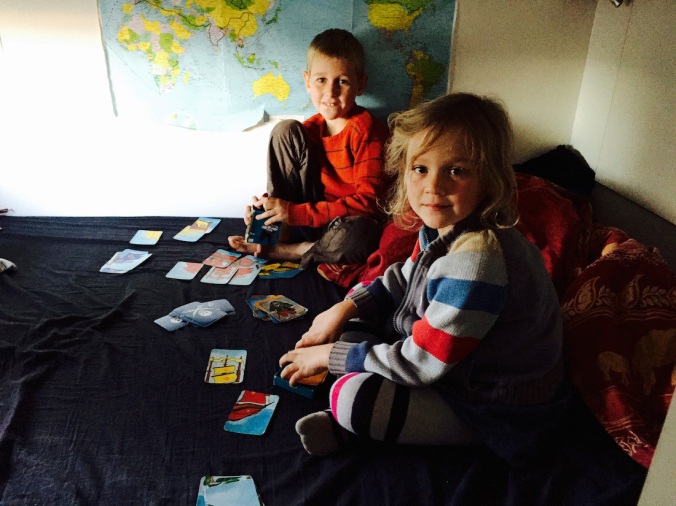 Laure was making some snacks. 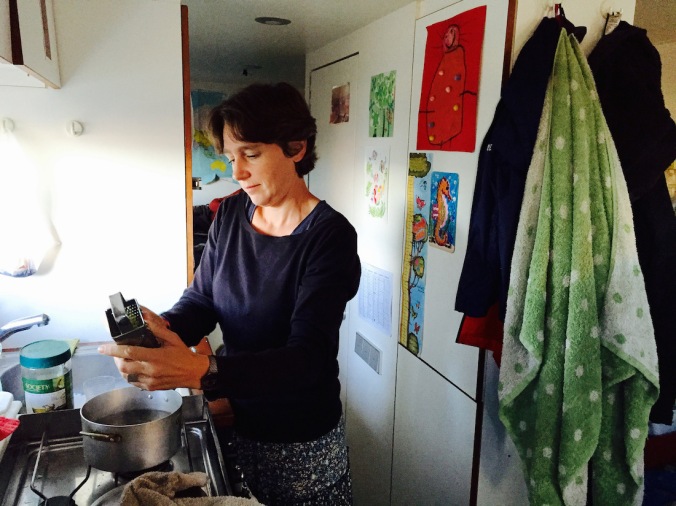 Frederic said the family is in year four of their five-year tour. Along the way, they’ve been documenting innovative ways people are practicing good ecology and sustainable living. They came to San Francisco to visit Recology, our globally fashionable, zero waste-aspiring trash processing facility, as well as several other waste management and recycling initiatives in the Bay Area.

Frederic explained that the family’s journey began with a comprehensive tour of South America. Then they shipped the truck back to Europe, and drove it from Turkey to Tibet via Iran and India. From there it was off to Mongolia, then down to Laos, Cambodia, and Indonesia. In between they make videos like this:

There was a hop to Japan, and an arrival in North America at Montreal. From there they drove to Alaska, down to Vancouver, and eventually to Bernal Heights.

Bernalwood encouraged Frederic to call ahead next time they decide to visit Bernal Heights, so we can  arrange a more proper welcome.

As things stand, Frederic said they had a nice stay here, that they’ve enjoyed their view of the I-280 Spaghetti Bowl, and that that only one Bernal neighbor warned the Cébron family that their planet-traversing home on wheels had been parked on Bernal Hill for more than the legal maximum of 72 hours. He also spoke very highly of the neighborly hospitality the family had received when they were parked in Teheran.

The Cébrons are overlanding to San Diego next. After that, they drive into Mexico and around much of Central America, before bringing their five-year journey to an end in Panama.

Against that backdrop, Bernal Heights might not be the most exotic place the family has been. But it may well be one of the most glamorous. Bon voyage, Frederic, Laure, Martin, and Chine! 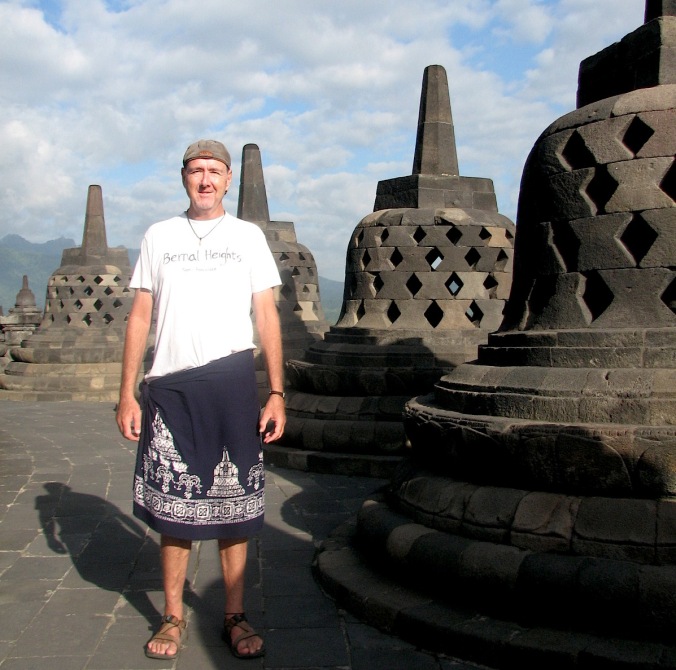 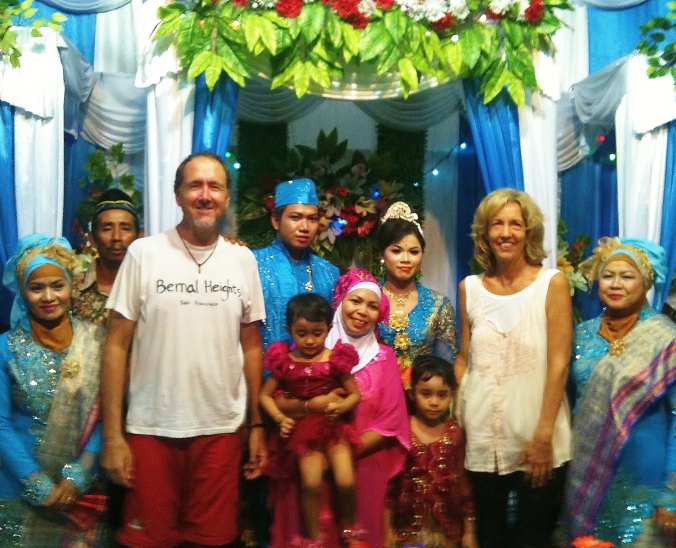 When we last heard from Bernal neighbors Matt and Jennifer last November, they were happily enjoying an extended post-retirement tour of Southeast Asia. This week, Neighbor Matt wrote Bernalwood to say… they’re not ready to come home yet:

Just wanted to say hello again. Jennifer and I left Bernal 15 months ago to explore Southeast Asia. At some point we will return. As best I can, I read up on the events around Bernal, and still wish that I could be in two places at once. So far we’vre travelled to Singapore, Thailand, Myanmar, and the Indonesian islands of Bali, Borneo, and Java. Bernal has some ties to Bali.

Last September, as a birthday present, a new friend here in Bali (named Heiner) gave me a print from an artist friend he knew in Bernal: Jesse Schlenkler – I received the second painting shown in this post!

I proudly wear by “Bernal Heights” t-shirt often. We met a lovely family who were visitng Bali a few months back, and who saw my shirt and introduced themselves. They have good friends in Bernal, with whom they were soon going to visit. And, another friend of ours here has a good friend from our village on the hill.

Not long ago we happened upon a beautiful roadside wedding in Borneo, and stopped to take photos from across the street. But we were seen by the guests, and invited in – despite our sweaty, dirty appearance. We were well fead, seated in the front row, and then requested to stand with the wedding couple and their parents for dozens of photos. It was all a bit surreal, and really fun. We left 45 minutes later to a hundred waving new friends, blowing us kisses.

My sandles are in Southeast Asia, but my heart is in San Francisco. 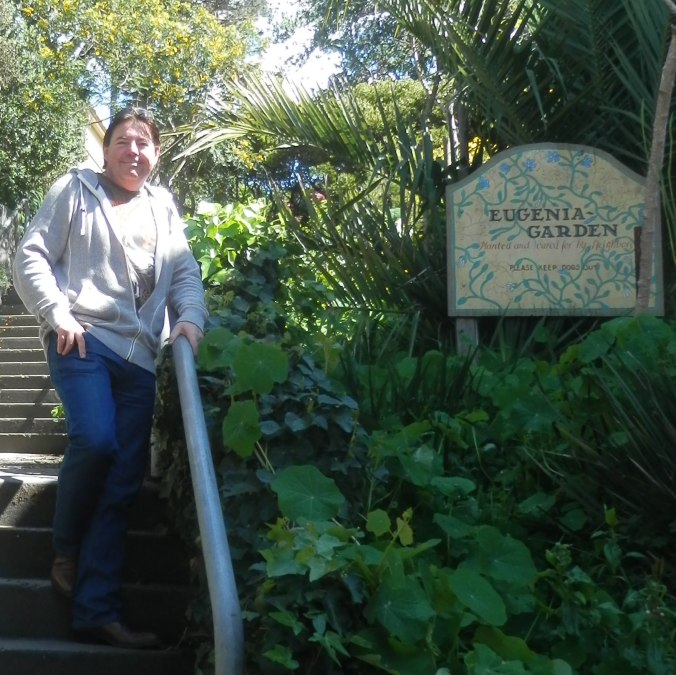 British tourist and Honorary Neighbor Tony Quarrington is back in the UK after concluding his two-week vacation in Bernal Heights. If the Dominion of Bernalwood had a listing on TripAdvisor we’d likely be pulling five-stars right now, because Tony reports he felt the full Bernal magic during his stay.

In a post entitled “Ten Reasons for Loving Bernal Heights,” Tony summarizes some of the things he enjoyed most about going native among us:

A little more than a week ago, we had to leave our temporary residence in Bernal Heights for “home” in the UK.

But I do not want to put that experience to one side just yet (and we will be returning next year), without paying one final tribute to the neighborhood.

So here, in this fifth and final article in the series, are this visiting Englishman’s ten reasons for loving Bernal Heights.

Read the article to go deeper into the ten things Tony loved best about Bernal — it’s a thoughtful and thorough assessment. We look forward to his glamorous return in 2015.

Best of all, we’ve managed to garner this generous praise even before breaking ground on the construction of the fabulous Bernalbleu Hotel and Resort, which is scheduled to open sometime during the spring of 2375. Our  beaches will be vastly improved by then, and we hope Tony’s heirs will be no less impressed.

Neighbor Noah Lang lives in Precitaville, and he runs the wonderful Electric Works fine art press in SoMa. He’s a terrific fellow with superb taste, and I suspect he’d be a great travel companion. That’s important, because Neighbor Noah would like you to join him on a tour of North Korea.

Yes, just imagine the surreal sensation you will feel as you compare notes with Neighbor Noah about your favorite Cortland Avenue boutiques while taking in the art and architecture of exotic Pyongyang!

There’s an informational meeting about the trip happening at Electric Works (1360 Mission St., first floor) on Thursday, January 30  at 6:30 pm. Until then, Neighbor Noah writes:

I took my first trip to North Korea, the Democratic People’s Republic of Korea in 2008 as a side trip from Beijing while attending the Olympics. It was an amazing, eye-opening trip.

The DPRK is perhaps the least-well understood country of our times.  And while relations between the US and the DPRK are strained, travel there is relatively quite safe.

While traveling in the DPRK, we will be under auspices of Koryo Tours. They are by far the most experienced, most trusted company that offers travel to the DPRK.  Their connections go back over 20 years and they offer access to this secretive country that no one else can or does. During this art and architecture tour, we will gain access to buildings and sites that have previously remained closed to all other Western travelers.

The people behind Koryo Tours are responsible for, among other things, several interesting films on the DPRK.  Several of these films, including “A State of Mind,” “Crossing the Line,” and “The Game of Their Lives” offer a look into this mysterious country. I highly suggest watching what you can before the tour. All are available through Netflix.

But I’m inviting you to travel with me on a once-in-a-lifetime tour to a country like no other.

The sights in the DPRK are unlike those in any part of the world.  Many people who have traveled there have compared it to stepping into a time machine.  Pyongyang is an amazingly clean, modern showcase city: the jewel of the DPRK.  During the tour you’ll find a sparkling city, lined with trees, fountains and parks.  The architecture is what caused me to take a second look while traveling there. These were not your typical Stalinist-era concrete monstrosities. That’s when I first thought of a trip devised to have a focused look at its idiosyncratic design and often surprisingly playful nature.  The public art, while all supporting the vision of the DPRK’s founders, is quite powerful; the mosaics, statues and painting all impressive.

Dates are April 12—19, 2014. Travel is from Beijing to Pyongyang and back. Please visit the itinerary page for a detailed description of the tour.  We need to be in Beijing on the 10, and flights can be scheduled home as early as the the evening of the 19th. 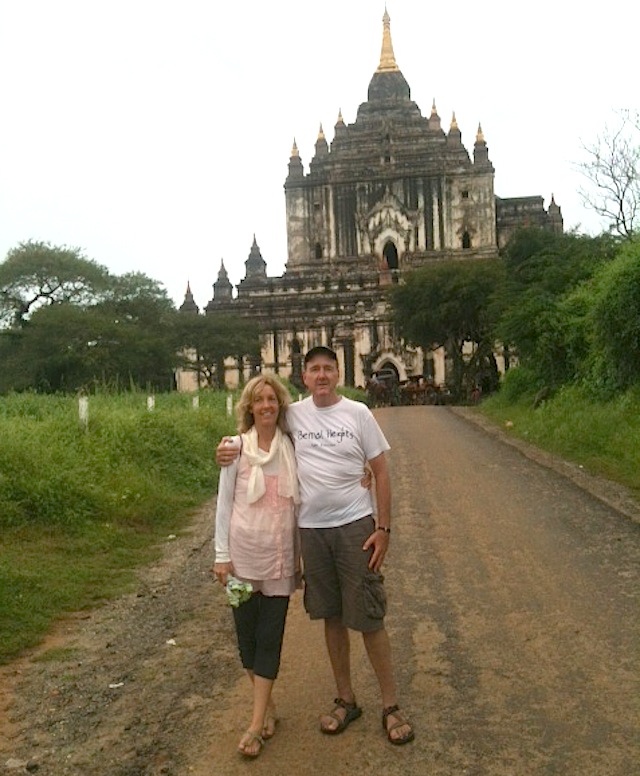 Neighbors Matt and Jennifer are on a global walkabout, but they sent Bernalwood a sweet note via eAir Mail to let us all know they’re thinking of us:

Jennifer and I decided that life is short, and took an early retirement in April. We rented out our home on Anderson Street and left our beloved Bernal for what we hope is two or three years in Southeast Asia. We moved sight unseen to Ubud, Bali, Indonesia, to use as our home base. We have been learning the language, exploring the land, and loving the culture and people.

We spent two weeks recently in Bangkok and Chiang Mai, and are now in Bagan, Myanmar, which is amazing and quite different from Thailand and Indonesia.

For my birthday last month, Jennifer had this “Bernal Heights” t-shirt made, to help me cope from bring away from my favorite village and my favorite city on the planet. Here’s a photo taken earlier today as we biked around the vast plains with hundreds of scattered temples.

Our travel blog is: SEA for Ourselves.

We send our best to our Bernal friends, businesses and neighbors.

Here’s a detail of that sporty Bernal Heights t-shirt. Sweet! 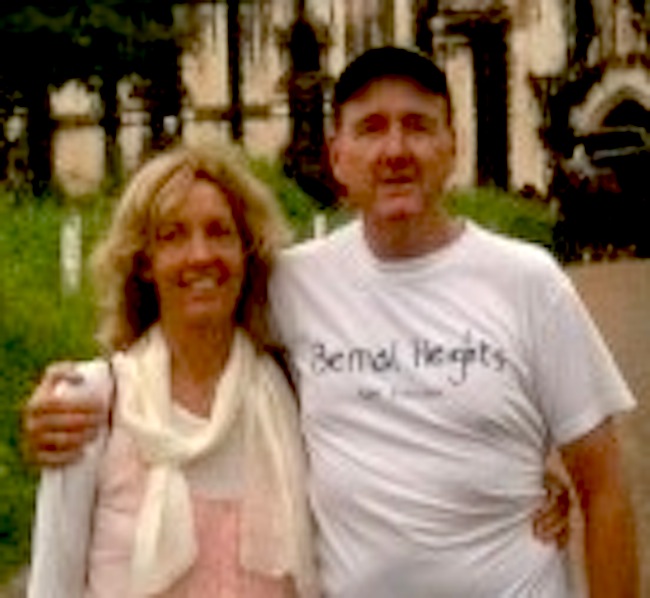 Our great hope is that when you return, you will open a cozy little warung on Cortland specializing in authentic nasi campur.