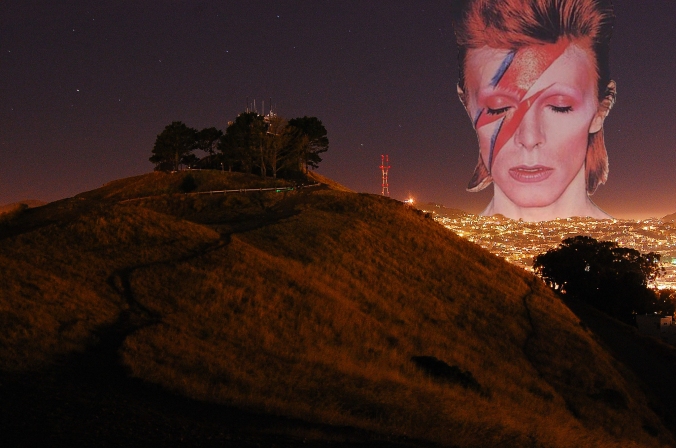 Something beautiful, and lovely, and enchanted, and very Bernal happened last night. At the end of a day that many Bernalese spent mourning the death of David Bowie, a Bernal neighbor hit upon the genius idea to organize a tribute: A renegade David Bowie singalong and dance party on Bernal Hill. 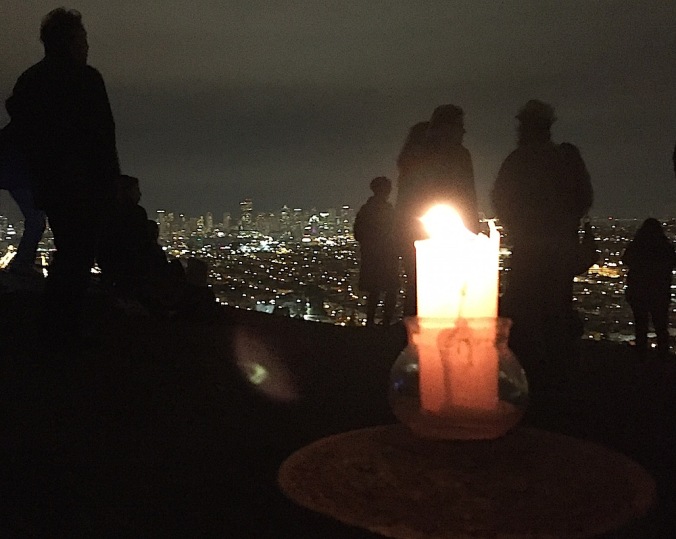 Bernalwood received a private communication about the idea from Neighbor Sam via the red phone late Monday afternoon:

Hey Bernalwood….wondering if you’ve heard of any memorial gathering in Bernal tonight for a little Starman sing-a-long? Was thinking top of the hill at sundown…

“Oh hell yes!” we said. By 5:30 pm Neighbor Sam had completed the arrangements. She’d procured two loudspeakers, wrangled a generator, and compiled an all-Bowie playlist. An 8 pm start-time was selected, and shortly before 6 pm, Bernalwood was authorized to begin transmitting an all-points invitation via our social media frequencies:

The result was that even though there had been just two hours of advance notice for Neighbor Sam’s renegade David Bowie memorial singalong, somewhere around 50 to 75 people come together on Bernal Hill to remember Bowie’s life and listen to his music.

It was dark on our hill, but the air was  calm and clear, and the lights of San Francisco unfurled like a twinkling Ziggy Stardust galaxy below. Here’s a sampler of the scene; a video montage of three Bowie songs, as experienced by a very lucky group of neighbors on Bernal Hill last night:

The tribute lasted for about an hour and a half, and there were many smiles and hugs, and then it was over.

Immense thanks go out to Neighbor Sam, who provided the inspiration and the infrastructure to make this magical, musical Bernal Bowie memorial happen. Somewhere in space, we know David Bowie was smiling.