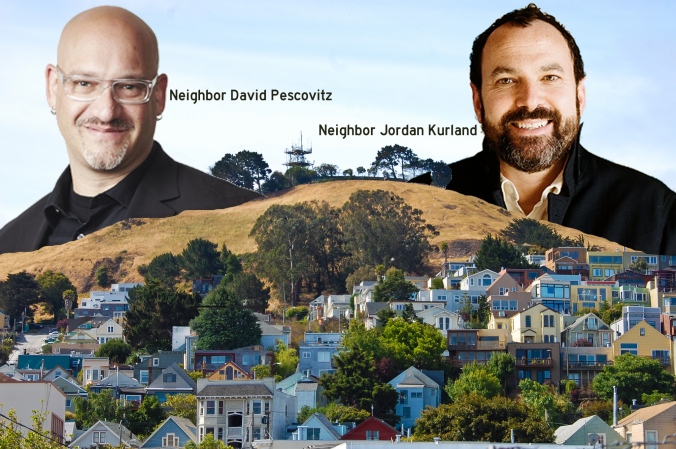 You did know that David Pescovitz, celebrity blogger with the intergalactically famous BoingBoing blog, lives in Bernal Heights, right? Well, it’s true. He does.

And you already know that local music meta-star Jordan Kurland lives in Bernal Heights, too? It’s true. He does. Neighbor Jordan is the creative force behind many of San Francisco’s much-beloved music events, including NoisePop and this weekend’s gigantic  Treasure Island Music Festival. His Zeitgeist Artist Management also manages bands like Best Coast, Bob Mould, The New Pornographers, Rogue Wave, She & Him, and Thao & The Get Down Stay Down.

Because they are neighbors, Neighbor David and Neighbor Jordan have become friends. This week, David interviewed Jordan to get an insider’s perspective on the state of the music biz. A local-flavored excerpt:

[Neighbor David]: As a manager, it seems like you’d be living in Los Angeles or New York City. But yet you came to SF and never left. Why?

[Neighbor Jordan]:I moved to San Francisco in 1995 for a job. I was nearly a year out of college and knew that I wanted to try to be a manager. I was living in Los Angeles and answering phones for the performance rights organization, ASCAP. It was the typical entry level music industry job and not easy to land. I went on four interviews before I was hired. If I had stayed on that path I would have answered phones for a year or so, then become an assistant, and then, eventually, a membership director. All of which would have been cool, it’s just that I knew based on my experience interning for a few different companies during college, that I wanted to try to be an artist manager. There was an amazing opportunity up in San Francisco to work for a company called David Lefkowtiz/Figurehead management. The roster was Primus, the Melvins, Charlie Hunter and a few other acts. I spent four years there, learned a ton, and began managing the acts that became the first iteration of my management roster. It was also during my time there that I met Kevin Arnold and began working alongside him on Noise Pop. Kevin founded Noise Pop in 1993 and the first festival I worked on with him was 1998.

I started my management company, Zeitgeist, in 1999 which was the same year the music and technology were beginning to converge. It was the year that MP3.com, eMusic and Napster, to name a few, started to make waves. It wasn’t good news for the music industry but it did justify my existence up here. All of a sudden I had a competitive edge by living in the Bay Area.

The reason that I never left San Francisco once I arrived is simple: I adore this place.

You’re active in the city with the music festivals, investments in numerous restaurants, and donating your time to 826 Valencia, Stern Grove Festival, and other arts and culture organizations. As you know, SF is experiencing its own culture war right now. Where do you stand and what can be done in your opinion?

To be clear, I’m not one of those people that rails against the tech industry. To the contrary, I think it’s pretty incredible to live in the heart of where these innovations which are being dreamed up and born. It’s not a coincidence that a creative, intellectual and way left-of-center city like San Francisco attracted the entrepreneurs that built these companies. With all that said, the city needs to do more to protect its creative community. A lot more. The Bay Area is incredibly expensive which does not bode well for an upstart musician or artist. I know some folks in the private sector that are starting to help but the city, as far as I can tell, has only made cosmetic offerings at best. The musical cultural history is so, so rich here: Summer of Love, Bill Graham, the Grateful Dead, the jazz scene of the 50s and 60s, the Dead Kennedys, Journey, Metallica … it goes on and on. But San Francisco does not do much in the way of supporting musicians and visual artists and film makers. And because it’s prohibitively expensive to live here fledgling artists are moving to Los Angeles or Portland where it’s cheaper and there’s a stronger, more inspiring creative community. Which leads the established artists who can now afford to live in the Bay Area to leave because they don’t have a strong community around them. I don’t pretend to know of a simple solution but it is clear to me that the city should be attacking the issue with much more urgency.

Read the rest of the interview here, and if you’re headed to Treasure Island this weekend, give Neighbor Jordan the secret Bernal Heights hand signal.