Last weekend’s dramatic 6.0 earthquake was centered around American Canyon, but it caused substantial damage in the nearby town of Napa. Get well soon, drinky Wine Country neighbors!

But did you feel the quake here in Bernal when the earth shook at 3:20 am? The answer to that question seems to vary depending on a) the precise location of your home, and b) how heavy (or light) a sleeper you are, and c) if you have dogs.

Regardless, this earthquake provided a vivid demonstration of the importance of personal earthquake preparedness, and even better, NERT training.

It also provides yet another opportunity for all Bernalese to give thanks for the blessed chert that has endowed our neighborhood with such a stable foundation of earthquake-resistant bedrock. As Julian Lozos, our Senior Seismologist, previously explained:

Geologically speaking, Bernalwood is actually closer to the San Andreas than downtown, but the solid chert bedrock that makes up Bernal Hill didn’t shake nearly as hard as the soft sediment and artificial fill of the Financial District, Mission, or SoMa. That same chert explains why Bernal residents often miss smaller quakes that rattle people in other parts of the City.

(SIDE NOTE: If you’re not following Julian on Twitter, you’re missing his awesome guided tour of last weekend’s quake.)

But what exactly is this blessed chert, for which we all should be so grateful? Where did it come from? And how did it end up in Bernal Heights? Here’s a basic 411 on chert from Gelology.com:

Chert can form when microcrystals of silicon dioxide grow within soft sediments that will become limestone or chalk. In these sediments, enormous numbers of silicon dioxide microcrystals grow into irregularly-shaped nodules or concretions as dissolved silica is transported to the formation site by the movement of ground water. If the nodules or concretions are numerous they can enlarge and merge with one another to form a nearly continuous layer of chert within the sediment mass. Chert formed in this manner is a chemical sedimentary rock.

Some of the silicon dioxide in chert is thought to have a biological origin. In some oceans and shallow seas large numbers of diatoms and radiolarians live in the water. These organisms have a glassy silica skeleton. Some sponges also produce “spicules” that are composed of silica. When these organisms die their silica skeletons fall to the bottom, dissolve, recrystallize and might become part of a chert nodule or chert layer. Chert formed in this way could be considered a biological sedimentary rock.

Bernal’s chert is a local type called (…wait for it...) Franciscan chert, and Franciscan chert comes from compacted sediments formed by zillions and zillions of  tiny protozoa critter skeletons. Over the course of zillions and zillions of years, these sentiments hardened into layers on the bottom of the ocean, and today those layers are clearly visible in the cross-section of our chert.

The Wikipedia page for Bernal Hill explains how our chert became our hill, and why it’s that stylish reddish color:

Bernal Hill, along with the other hills in the San Francisco area, is a folded hill, created by the “wrinkling up” effect of the Pacific plate subducting under the North American plate, when the North American and Pacific plates were converging, around 150 million years ago. Near the summit you will find folded layers of very hard rock called radiolarian chert. It is a sedimentary sillicate rock which gets its sillica content from the shells of microscopic creatures called radiolaria. The red color comes from iron oxide.

So that’s how Bernal ended up with all our chert, and how it got its coloring. And here’s how our chert is distributed, as seen through the spiffy Google Earth Geology layer: 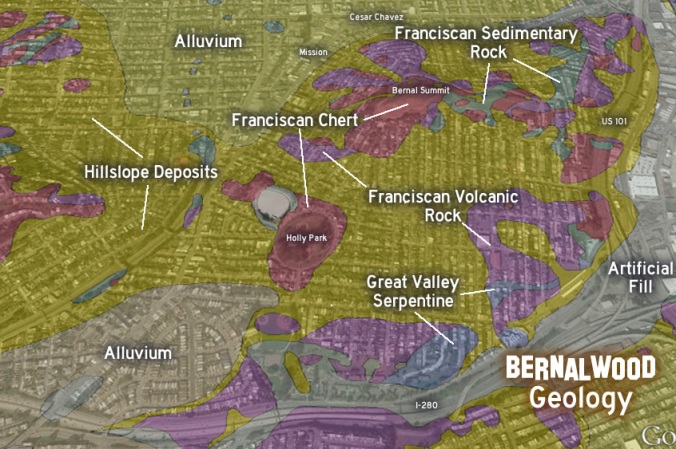 Here’s the reverse angle, looking at Bernal Hill from the north:

As Julian explained a little while back, our beloved chert anchors Bernal Heights and absorbs much of the energy created by seismic waves.  So if you happen to be on Bernal Hill in the next few days, go ahead and find one of our rakish exposed chert formations. Then, approach the chert reverently, and give it a big wet kiss. Someday, the home that chert saves could be your own.

24 thoughts on “After That Earthquake, Have You Hugged Bernal’s Chert Today?”