For those who knew Alex Nieto, the young Bernal resident killed during an officer-involved shooting on Bernal Hill last spring, the last few months have been unrelentingly sad — and at times, deeply alienating.

Bernalwood recently described how the official investigation into Neighbor Alex’s death seems unlikely to provide much factual insight or emotional closure — ever. Which is horrible. Yet more immediately, the family and friends of Alex Nieto have been infuriated by multiple instances of vandalism targeted at the ad hoc memorial to Alex constructed at the site where he died on the north side of Bernal Hill, just west of the Folsom gate.

(Preemptive Sidebar: In the recent Bernalwood update on the Nieto investigation, some readers were unhappy about the presence of this private memorial on the public land of Bernal Heights Park.  Bernalwood reader Adam K. very graciously and compassionately addressed this by placing the memorial within the Latino tradition of creating temporary memorials to honor those for whom death has come suddenly and unexpectedly. Adam’s comments are consistent with Bernal values in the best possible way, and are highly recommended.)

The first report about vandalism of the Nieto memorial appeared on the Justice for Alex Nieto website on July 13:

We are sad to report that in the past two days the memorial altar to Alex Nieto has been vandalized. Someone first took the banner that said “No Más Violencia de la Policia” (No More Police Violence) and last night, the cross (with his portrait) set close to the site of his death was removed. Alex’s parents —Elvira and Refugio Nieto— tirelessly refresh flowers and maintain the banner and altar. Yesterday, knowing about the mysterious loss of the banner, we gathered with Windsong (a City College student, a Bernal Hill dweller since childhood, and the original designer of the banner) to design another one that we intended to place again today. We suspended any judgement about why the banner disappeared, but with the loss of the cross, it is a clear malicious act.

In the wee hours of Friday July 27th, Maria and Adriana [from the Justice and Amor for Alex Nieto Committee] watched the sunrise over the Bay. By 6:30am Refugio Nieto arrived with La Gorda (the 3 year old family blue pitbull.) They drank coffee made by Adriana and chatted and chatted. Harried dogwalkers of all sorts began to roam the hill. La Gorda whined for the other dogs to come visit her, and they often obliged. We began laughing about how everyone, even little old ladies, looked suspicious to us. We have our favorite suspect (one who seemed to be holding a can of spray paint).

There comes a moment during the morning on Bernal, when the stream of dog walkers and joggers becomes continuous and the Memorial is kept by the same life on the hill.

The last weeks on Bernal have been illuminating. We have learned that we have countless of anonymous supporters among the daily walkers on the hill. Even before the vigils began, while we were on the hill repairing the site, pedestrians often stopped to thank us for keeping the Memorial alive: Russell expressed how much he loved the Hill for its diversity and neighborliness, and expressed his sorrow at Alex’s shooting. Homeboy Reynaldo stopped to stay he’d be happy to cover Alex’s Story in cholo magazine. Adriana and Maria even met one of the last people to have seen Alex alive on the hill. (Don’t worry, he already gave his witness statement.) All in all, the more time we spend on the hill, the more people who come around respectfully and curiously to ask us questions and learn about Alex’s Story.

Yet once again, on July 29th, the site was vandalized, as someone removed the photo of Neighbor Alex that hung on the memorial cross.

Last weekend, Justice and Amor for Alex Nieto Committee posted photos and a video of a man whom they believe may be responsible for the vandalism. They seek community input to help identify the alleged vandal.

Yet to anyone who may have defaced the Alex Nieto memorial on Bernal Hill, we would simply say this:

The death of Neighbor Alex Nieto brought immense pain to his family, his friends, and our community. Let the grieving run its course. Let the healing commence. Let it be peaceful, and let it remain undisturbed. Please. Just stop. 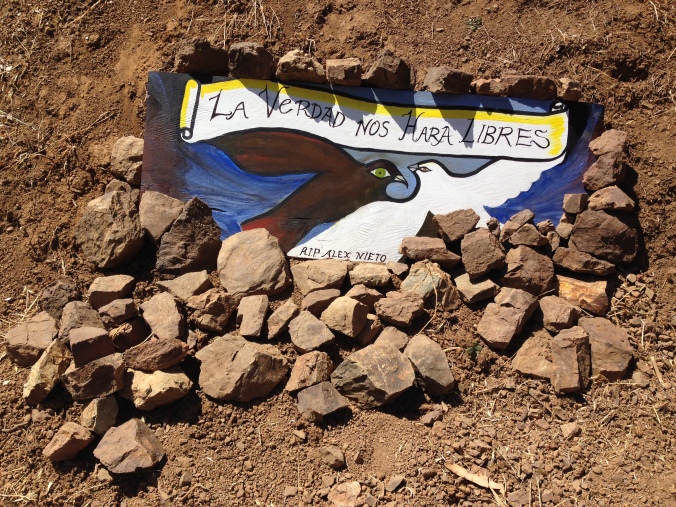 ALL PHOTOS: Justice and Amor for Alex Nieto Committee