As you may know, “cow-tipping” is mostly at the stuff of rural legend. As Modern Farmer explains, “Cow tipping, at least as popularly imagined, does not exist. Drunk young men do not, on any regular basis, sneak into cow pastures and put a hard shoulder into a cow taking a standing snooze, thus tipping the poor animal over.”

That may be true. Yet here in Bernal, we have experienced a very real wave of Smart Car Tipping which has seen [probably drunk] young men sneaking onto quiet streets and putting a hard shoulder into parked Smart Cars, thus tipping the poor vehicles over.

The crack team at Bernalwood might already have heard this over the police scanner but, just in case: there has been a rash of Smart Car tippings in the neighborhood. The last count I heard was three. The first I heard of this phenomenon was a crash outside my front door followed by the sound of a vehicle racing away. I ran outside to find my neighbor’s Smart Car tipped on its side into the middle of the road. This occurred around 1:00 AM on the corner of Ogden and Anderson Streets. The car suffered what appears to be minor damage (including broken windows and side-view mirror. The Smart Car of my other neighbors remains, mercifully, untipped.

Please caution readers to look after their little buddies. If they can, maybe put them in the garage for a day or two.

Or the barn, if you have one. Meanwhile, KRON-TV reports on other incidents around Bernal and in the Portola: 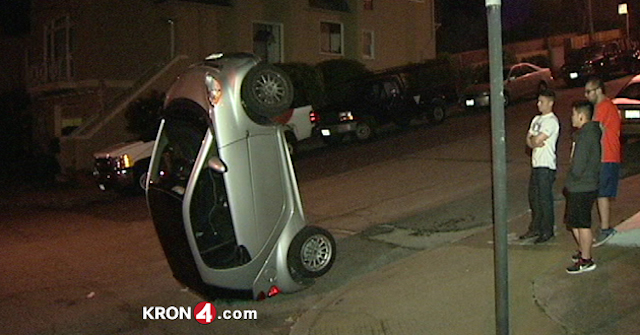 Witness Brandon Michael says he was smoking a cigarette when one of the incidents happened near Bowdoin and Sweeny at about 12:30 a.m. Monday.

“All of a sudden I just see eight hooded figures walk up to the car,” Michael says. “I thought it looked like they were up to no good. And then sure enough they walk up to this smart car right here, all huddle around it, and then lift it up and set it on its hind legs.”

Michael says he thinks the whole thing is kind of silly but clearly an act of vandalism.

Police say witnesses report seeing similar vandalism on smart cars at about the same time just on the other side of I-280. One smart car ended up on its side at Anderson and Ogden while another was left on its roof a few blocks away at Anderson and Courtland.

UPDATE: Neighbor Brandon shares these photos of the fourth Smart Carnage incident on Prospect at Coso in Bernal:

30 thoughts on “UPDATED: “Smart Car Tipping” Is a Thing, and It Happened in Bernal Heights Last Night”