The end came not with a bang, or even with a whimper. It was more like a deep, bubbling hisssssss.

The Bernal Dads Racing Team has announced the demise of the Molvo, their oddball race car with identity issues.

As you may recall, the Molvo began life as a 1995 Mazda Miata, before it was transformed into a 24 Hours of LeMons race car in 2010. After several successful forays on the track, the bodywork from a Volvo 240 station wagon was awkwardly grafted on to the BDR Miata, creating a strange Miata-Volvo hybrid. 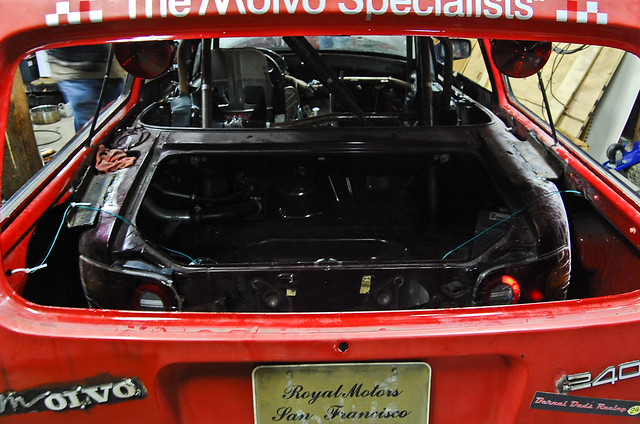 At which point it became the mutant known as the Molvo: 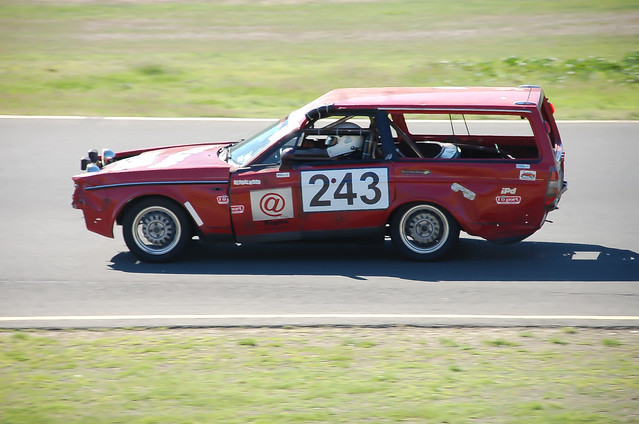 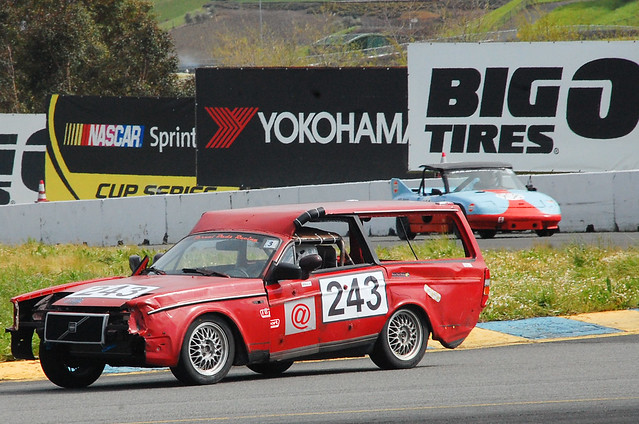 In Volvo drag, the Miata went on to win the coveted LeMons Judge’s Choice trophy at Sonoma Raceway in 2011, bringing honor and glory to all of Bernal Heights in the process:

Baffling to all who saw it, the Molvo completed several more races in the guise of a wannabe Volvo, earning ample respect and even a sexy cameo on the home page of the 24 Hours of LeMons race series:

Eventually, however, the novelty of racing a Miata cross-dressed as a Volvo began to wear thin, as the weight penalty associated with carrying around a useless Volvo body shell grew tedious.

So a weight reduction program was undertaken. First, the rear part of the Volvo roof was cut off, and the Molvo briefly raced as the “Molvochero.” 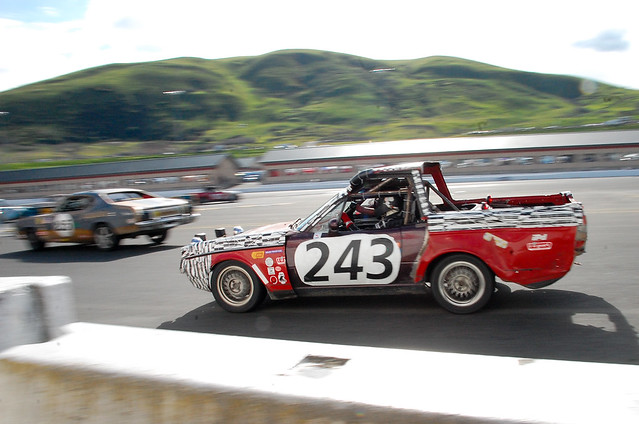 Even this reduced costume grew stale, so the remaining Volvo bodywork was finally removed, once and for all, last year. Repainted in gold spray-paint after a hasty trip to a trackside WalMart, the car then went on to complete valiantly in several more races as a restored — albeit extremely ugly — Mazda Miata. 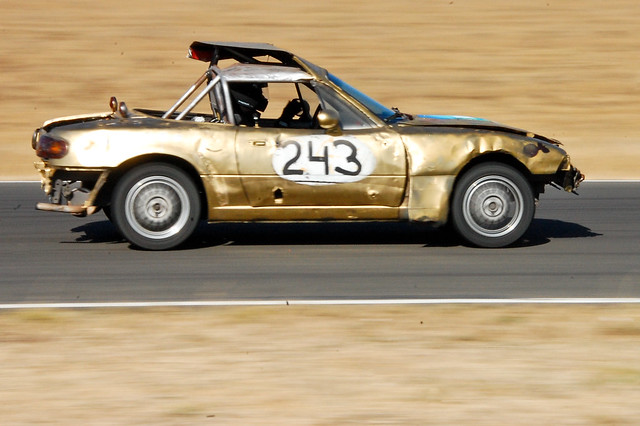 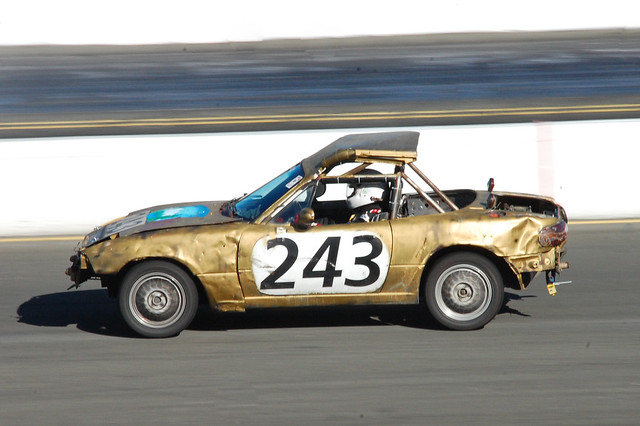 The Molvo’s final “trophy” came in the form of a penalty handed out by the LeMons judges for a driving infraction. After presenting the Bernal Dads with a set of paints, a tattered copy of “Discover the Joy of Painting with Bob Ross,” and a rasta wig, the  judges ordered the Dads to execute a copy of a Bob Ross painting on the hood of the car. Which they did, in rather impressive style: 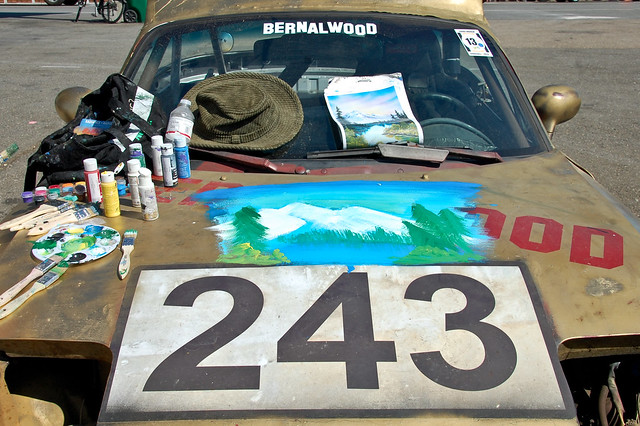 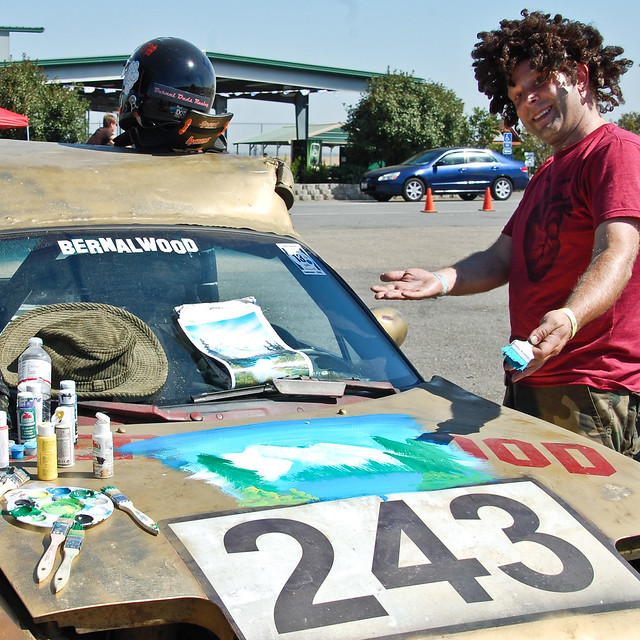 Last December at Sonoma, however, the ex-Molvo became sad.

From the moment it was removed from the trailer, the Miata began experiencing overheating problems that persisted even after the Dads performed an emergency trackside water pump replacement. Toward the end, the Miata was overheating every 10 minutes, and when Racer Brandon finally brought it into the pits the car was a hot, steaming mess.

In the end, the head gasket was likely blown, and the head itself might well be warped. These are addressable problems, but the BDR elders decided that it was time to move on. The ex-Molvo was put up for sale, and last week it was purchased by a  new race team seeking to get a start in the exciting world of 24 Hours of LeMons racing:

The Bernal Dads wish them the best of luck.

Now the Dads have undertaken a new project — one that might be even more foolhardy than putting a Miata in a Volvo costume. They recently acquired a 1987 Alfa-Romeo Milano from the estate of a deceased gentleman in Marin:

Work is now underway to transform this esoteric Italian automobile — with all its attendant Italian mechanical quirks — into a LeMons-ready endurance race car in time for the next LeMons race at Sonoma on March 22.

The Molvo is gone, but the Milano will soon be ready to race on Bernal’s behalf.

4 thoughts on “Bernal Dads Racing: The Molvo Is Dead! Long Live the Molvo!”