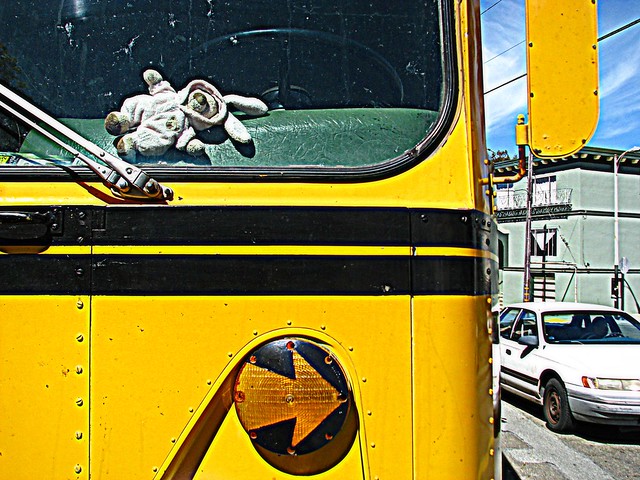 The yellow school bus that’s often parked on Bernal Heights Boulevard is a regular focus of a) curious speculation, and b) abandoned vehicle reports filed by Bernal neighbors.

Suffice to say, the bus is not abandoned, nor is it used for residential occupancy. It belongs to Neighbor Alex, and Neighbor Alex would like to address his neighbors directly to provide an alternate perspective on the parking-enforcement aggressiveness directed at his vehicle.

I’ve been thinking too long about how to respond to Bernalwood (and even the hilarious comments), because I really want to address parking in Bernal on Bernalwood, but in the best way possible. This requires a combination of humor about and evidence of the ridiculous charades that go on in our neighborhood that I and others find so depressing. Anyways, I’m feeling inspired now.

I have tons of stories about parking in Bernal and my street, Shotwell, in particular but I think my favorite example about my bus and some psycho NIMBY neighbors happened a few weeks ago. Here goes:

I was on the east coast for a few days for a wedding, and my bus was parked up on Bernal Blvd as usual. When I’m in SF, I check on it everyday to make sure it hasn’t been vandalized or broken into (I put in LED fake candles and put down the curtains to make it appear as if someone is living in it and deter vandals/burglars). I also check daily to see if someone has put one of those yellow 72 HOUR PARKING notices on the window + chalked the tires, so I know I have to move it in a few days.

Because I was out of town, I asked my friend to check on the bus for me. He reported that everything was cool–there was no yellow sign–but that the tires were marked with the date being that day. So? That means someone 1) called the SFMTA, 2) reported the bus as an abandoned vehicle, and 3) waited till the yellow sign was applied 4) removed that sign so that I would hopefully not see the chalked tires, think everything was cool, and then find that my bud was towed 72 hours later and LEARN MY LESSON.

Now, I’ve talked to enough Parking Control Officers to know that when one of those yellow signs gets posted, it’s because a citizen called it in. And I’ve had enough posted on my bus the last 2 years to know how awfully tough the glue is on it. So yeah, I’m positive someone removed it with the intent to really hurt me. Luckily, I had been anticipating this and had the bus moved so it wasn’t towed.

Maybe the worst part was that this neighbor hadn’t called in for a yellow sign to be placed for weeks. I think they were trying to lull me into not checking so they could screw me over.

All in all, this vigilante stuff is pathetic and dark. One of my roommates, who is too lazy to register her car in CA and has Florida plates on her immaculate luxury volvo sedan, gets her car keyed and insane notes left on it.

By the way, it’s not like I’m not from a city. Lived in Bernal 3 years and I’m originally from D.C. where the Secret Service can just tow your car to a different spot if they need to, without telling you before during or after.

We are grateful to Neighbor Alex for sharing his perspective, and we would now like to issue a humble plea to all Ye Citizens of Bernalwood…

Over time, I have learned that learned that there is no topic on this cozy neighborhood blog that inspires as much venom as controversies about street parking in Bernal Heights. So while strong opinions are, as always, welcome, let us also remember that neighborly courtesy and respect are the cardinal virtues that make Bernal Heights so very Bernal.  Play nicely in the sandbox, please.

PHOTO: Top, the bus, by Giggie Larue. Below, a note placed on the bus last week, courtesy of Neighbor Alex.