Right now, tens of millions of desperate Apple iPhone and iPad users are rushing to download the brand new, just-released Google Maps app for iOS. They are doing this because Apple Maps has some trust issues, which makes the arrival (or, reprise) of Google Maps on iPhones and iPads a very big deal.

And when those tens of millions of lost map junkies click on the iTunes Store link to score a copy of the Google Maps app, they are each greeted with a screenshot that gives Bernal Heights prime placement. 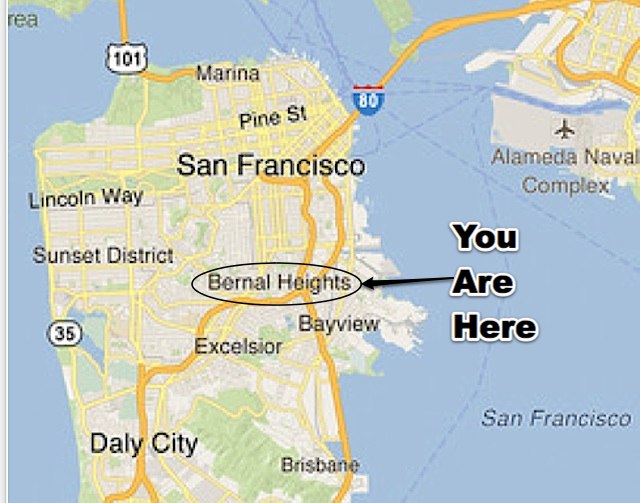 Now, Google is a company with deep pockets. A company that knows what it wants, and it knows how to get it. Google could have shown anyplace in the world on that map. They could have given a shout out to glamorous neighborhoods in New York, London, Paris, Milan, or Tokyo.

They gave a shout out to Bernal Heights.

Oh, and this isn’t just a Google thing, either.

Did you hear about the new Flickr app? The one that was also released yesterday? The one that’s also supposed to give the world a taste of how Marissa Mayer plans to save Yahoo? Well, it’s showing off some screenshots too.  And guess what so hot right now neighborhood scored a major cameo on Flickr’s stylish app promo page?

Let’s zoom and enhance for an even closer look:

UPDATE: In the comments, we learn that Neighbor Markus lives in Bernal and also heads up the product team at Flickr. So if you see him on the street, you can say hello, welcome him to the neighborhood, and insinuate your Flickr feature requests into the conversation. In the meantime, here’s the clean version of the photo shown above: