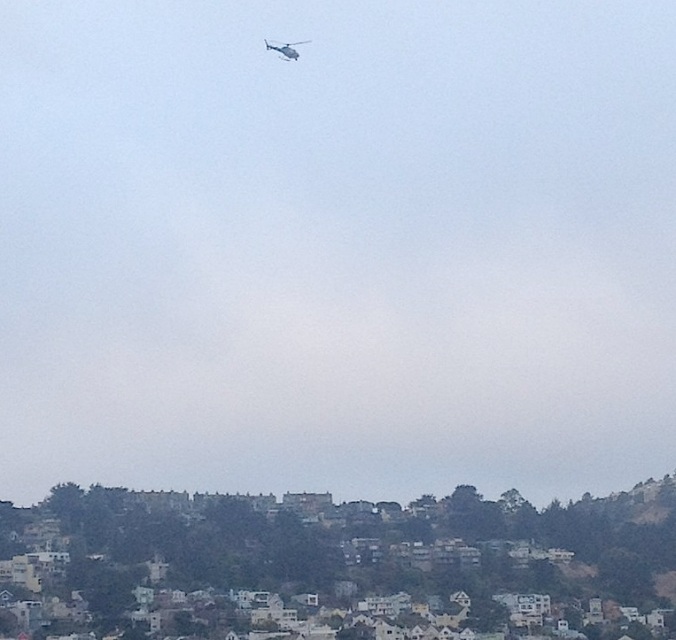 Nope,  I thought it was [a radiation-sniffing helicopter]  too,  but it was a news copter right above my house (in lower Noe) with camera trained on 28th and Church,  where there was a shooting and St.Paul’s school was locked down. I turned on channel 2,  and they had the shots from the helicopter.

ORIGINAL POST: Oh, perhaps you too heard that helicopter hovering over Bernal Heights between 6:30 and 7:30 this morning? Pay no mind… according to the SF Examiner, it was just part of a routine sweep to sample radiation levels on behalf of the National Nuclear Security Administration:

The flyovers are a part of a joint research project between the Department of Homeland Security’s Domestic Nuclear Detection Office (DNDO) and the National Nuclear Security Administration (NNSA) to assess natural background radiation levels. The survey will cover approximately 69 square miles over the selected locations. NNSA’s twin-engine Bell 412 helicopter, operated by the Remote Sensing Laboratory Aerial Measuring System in Las Vegas, Nev., will perform the survey. The helicopter will fly in a grid pattern over the locations about 300 feet above the ground. The flights will be limited to daylight hours and the survey is estimated to take about five days to complete.

The background data will be used by DNDO and NNSA to improve aerial radiation measurement capabilities used by local, state and federal entities.

Yes. Of course. Perfectly logical explanation. Completely routine. Nothing to see here. Move along… move along.

5 thoughts on “UPDATED: Don’t Worry, That Helicopter Hovering Above Bernal This Morning Was Probably Not Searching for Radiation”