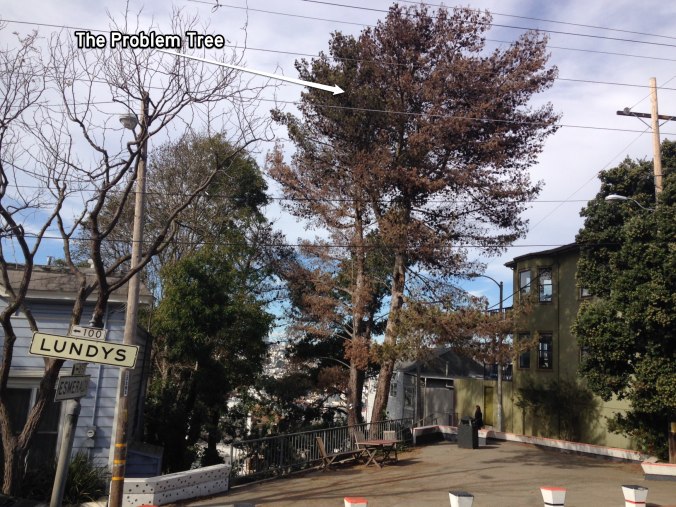 Bernalwood has previously shared stories about Bernal neighbors who have struggled to pay big bills levied by the City to cover the cost of street tree maintenance. Now, after some unpleasant wrangling on the Board of Supervisors, a proposition sponsored by D8 Supervisor Scott Wiener to get the City to once again assume responsibility for street tree maintenance is on track to appear on the November ballot.

Joshua Sabatini from The Examiner reports:

The agreement was announced Tuesday amid a turnout of about 300 people organized by the Friends of the Urban Forest, a nonprofit group that supports growing San Francisco’s tree canopy. San Francisco has approximately 105,000 street trees on sidewalks and medians.

For years, The City has controversially shifted the care of trees to property owners, after failing to fund tree care in its annual budget. But voters this November will have a chance to approve a charter amendment to require The City to take back oversight of all street trees, the liability that comes with them and any sidewalk damage the trees might cause.

The measure was introduced by Supervisor Scott Wiener, but a compromise was reached to shore up support from other supervisors, including Supervisor John Avalos, who had previously introduced a competing proposal.

“This is a grassroots movement that has been brewing for a long time of people in this city that understand that trees matter,” Wiener said. He called The City’s decision of “dumping responsibility” of street trees on property owners a “terrible and unfair system.”

The Examiner adds that a final vote to put the tree measure on the November ballot should happen in the Board of Supervisors today.