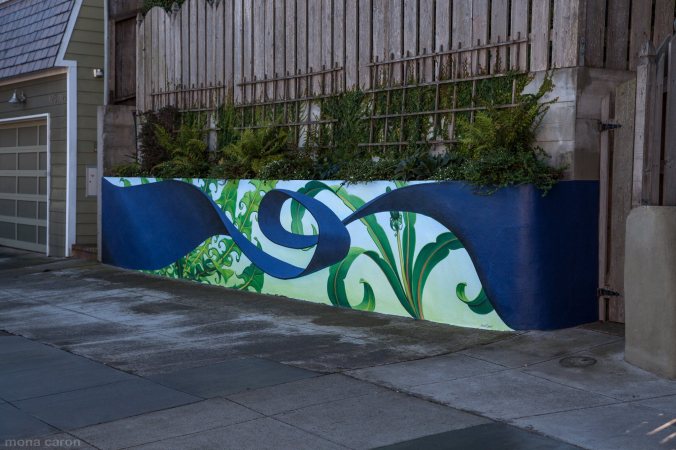 Artist Mona Caron just finished a beautiful new mural on Ripley just east of Folsom. But who’s Mona Caron? And how did the mural end up there?

The mural was commissioned by Neighbors Wayne and Janet, who tell Bernalwood the backstory:

After a stroll with a friend down Balmy Alley, we were returning home to Ripley Street and she suggested it would be nice to have a mural on my grey garden wall. I contacted Precita Eyes and discussed some of my ideas with one of the artists there, but I didn’t connect with the various artists’ styles. Another friend suggested I look at the murals at the Noe Valley Farmers’ Market on 24th Street. I loved the images and started a quest to find the artist, Mona Caron.

I contacted her through her web ite to see if she would be interested in a small, private project. She said she had a few projects in the works, but would be glad to talk with me a few months later when she returned. We got together over coffee a couple of times to discuss my vision for creating a garden on the street. Mona said she is currently in her “Weeds” phase (as you can see on her website) and would need to think about how she could try for what I wanted, yet be true to her current genre. We eventually agreed on the mural as it is now adorned on our garden wall. It is such a wonderful combination of color and movement. We love it and hope our neighbors do as well.

Mona is an amazing artist, as well as an amazing person. It feels like such an honor to have had such an accomplished artist invest in our garden and our neighborhood.

Indeed, Mona seems to have quite a fan club here in Bernal. In fact, Bernal artist Todd Berman first tipped us off about the new mural, and he provided some background about her work:

Mona Caron is an artist celebrated for her bikeways mural along the Duboce bike lane behind Safeway, and the Market Street Railways mural which illustrates the history and future San Francisco on a wall at 15th and Church.

Caron has made oversized weeds a theme in her work, partly as an example of what beautiful life can emerge through the cracks in the concrete of the city. In one panel of her Tenderloin mural at Golden Gate and Jones, she included floating seed pods that were each created by youth from the Boys and Girls Club across the street. Maybe this Bernal plant came from one of those seeds.

The rest of the Tenderloin mural is populated by portraits of people she got to know during the months she spent on the sidewalk painting.

Lately, Caron has been painting massive murals in far off countries, so Bernal is fortunate that residents have lured her back to the city to decorate our neighborhood with her work.