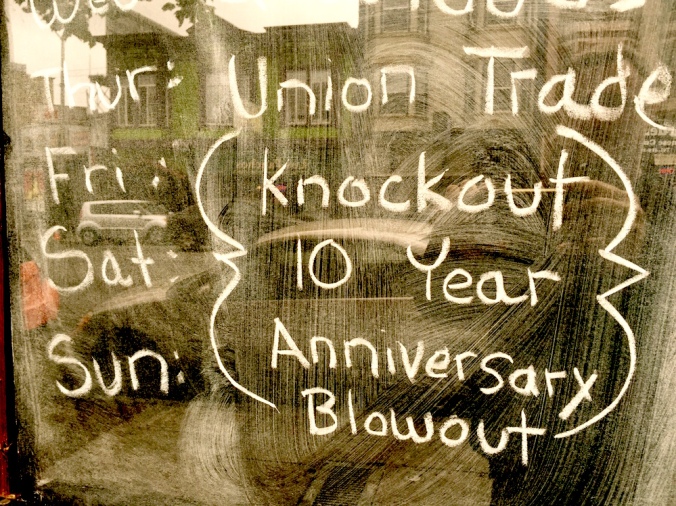 The Knockout on Mission Street (at Valencia) in La Lengua is one of Bernal’s underground treasures. This weekend The Knockout is celebrating its 10th birthday, and out hipper friends at MissionMission wrote it up (so we don’t have to):’

Can’t believe it’s been 10 years already! Seems like only yesterday everybody was like, “What’s the deal with this brand-new bar having ALL THE BEST BANDS AND DJs ALL THE TIME and isn’t their ‘NOPE’ sign funny???”

Seems like only yesterday Jay Reatard (RIP) was playing a 10-minute (amazing) set there. Back when the stage was next to the bar.

Seems like only yesterday we were there for an Oldies Night, laying eyes on Primo for the first time, all that energy behind the decks, and we were like, “ALL DJs SHOULD BE LIKE THIS.”

Seems like only yesterday we were there for a Debaser around Christmastime seeing their Weezer cover band and we were like, “THIS IS WAAAY BETTER THAN ACTUALLY SEEING WEEZER!” […]

COME CELEBRATE 10 YEARS OF THE KNOCKOUT! BRINGING YOU LIVE MUSIC, CHEAP DRINKS, KILLER DANCE PARTIES AND MAKING MEMORIES SINCE 2005! AS A SHOW OF THANKS FOR ALL YOUR SUPPORT OVER THE YEARS WE’VE PLANNED A KILLER WEEKEND OF DJs AND LIVE SHOWS TO KICK OFF THE NEXT 10 YEARS!!!

One thought on “This Weekend, The Knockout Celebrates 10 Years of Loose Morals”