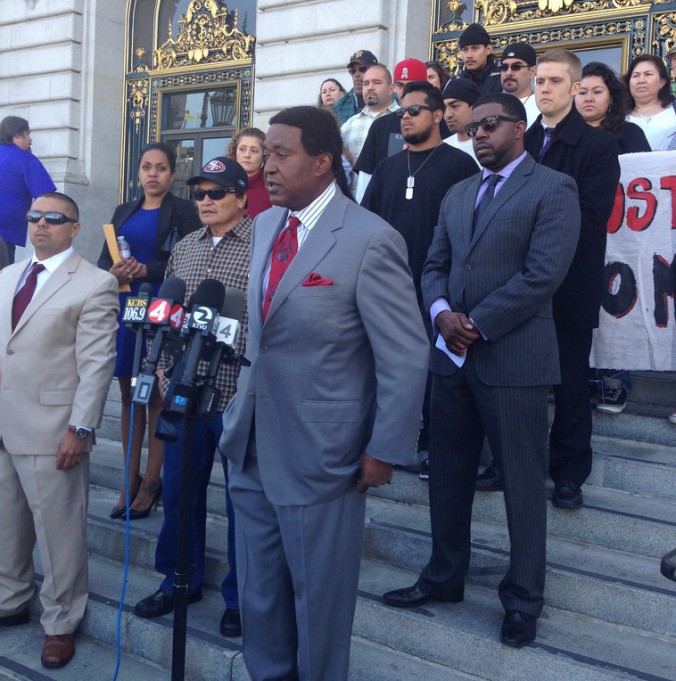 Bernal resident Alex Nieto was killed on Bernal Hill following an officer-involved shooting on March 21. Yesterday, attorney John Burris filed a lawsuit on behalf of Nieto’s family seeking to compel the City to provide additional information about the circumstances surrounding his death. The SF Examiner reports:

Alejandro Nieto, 28, a San Francisco resident, was killed in Bernal Heights Park after being asked to show his hands but instead drawing a stun gun that was mistaken for a real gun, according to police.

On the steps of City Hall on Monday, about 30 people held a banner asking for justice as a lawyer for the family announced the claim filing with the City Attorney’s Office and called on outside agencies to investigate the incident.

“The version of the story that the police have trotted out, we have concerns and frankly skepticism,” said Adante Pointer, one of the family’s attorneys.

The City has 45 days to respond to the claim, after which the Nieto family can sue for what it says was an unjustified killing.

However, well-known civil-rights attorney John Burris, whose firm is representing the Nietos, said any questions about the incident will never be answered under the current system, therefore the family must sue to find out what really happened.

That system of police oversight, from the Office of Citizen Complaints to the District Attorney’s Office, rarely finds police in the wrong, Burris said. Yet at least three recent incidents — a federal indictment of six officers for allegedly violating constitutional rights, a police-involved shooting that ended with a wounded officer and Nieto’s death — show they do in fact mess up and even break the laws, he said.

“It’s always justified,” said Burris of the findings of most investigations into police shootings.

Some of the questions that remain unanswered include how many times Nieto was shot, the names of the officers involved, and why police questioned the Nieto family and searched their home before informing them of Alejandro Nieto’s death.

Alex Nieto’s friends and family have created a website for him at justice4alexnieto.org. In addition, they plan to hold monthly Burritos on Bernal tribute walks on the 21st of each month, starting this Monday, April 21 at 5 pm. The walks will begin in Precita Park, and proceed up to Bernal Hill.