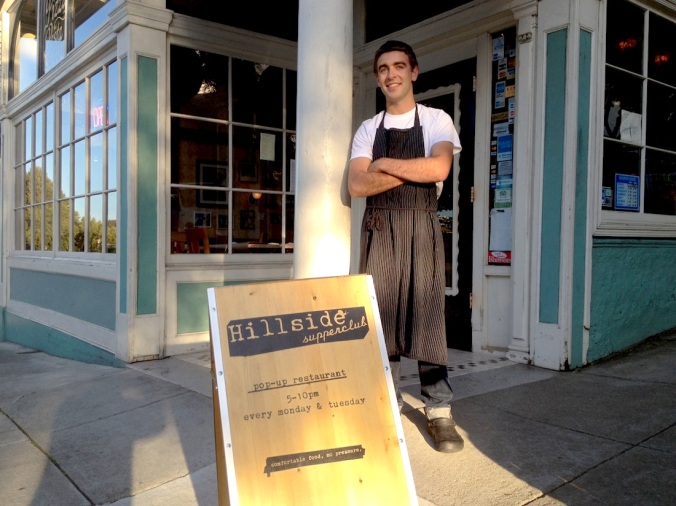 Here in Bernal Heights, Kickstarter fundraising efforts have become kind of like Louis Vuitton handbags on Cortland Street: Everybody has one. Let’s sit in on pitch meetings from three Bernal entrepreneurs:

Hillside Supper Club
Bernalwood has been following the adventures of the Hillside Supper Club since the days when it was called the Bernal Supper Club. In addition to making exceptionally yummy food, HSC wants to transform the sad Cafe Cozzolino space into a permanent culinary hotspot.

By this fall, we plan to be open six nights a week for dinner, self-service lunch (to include picnics in Precita Park), and brunch on Saturdays and Sundays. In addition, we will hold special dinners/classes with local farmers, artisans, wine makers, and butchers. We will stay involved with Slow Food and other local food communities to share food and nutritional education with others, especially the next generation of children. Once a month we plan to bring back an original 50’s “supper club” where we encourage guests to dress the part, with live bands and singers performing. We want to host “HSC movie in the park” events in Precita Park that will feature classic films along with hot beverages and popcorn.

Hillside Supper Club is looking for $25,000 to get the job done, and you can contribute until September 7.

Barbasket
Neighbor Chris from Alabama Street cooked up a clever idea to build a way-new bicycle handlebar that includes an integrated frame for a handy-dandy fabric cargo basket:

The Barbasket is a one-piece handlebar and basket rim that supports a fabric basket. The fabric basket holds your stuff snugly, and has a clever bungeed flap on the top that keeps your goods secure. But the best part is that it does all that without looking like a janky add-on. It’s a basket that becomes part of your bike.

Zip Cup
Neigbor Karla lives over on Coleridge, and she wants to create the ultimate to-go coffee cup:

A few years ago, I got sick of schlepping my reusable coffee cup to Martha’s and Nervous Dog. So I went out and created Zip Cup–I took the collapsing coffee cup you had as a kid, made it safe by adding locking mechanisms used on space shuttles and submarines, made it stylish/attractive, cut out the BPA and voila — an easy-to-carry, safe, awesome, Made in Bernalwood collapsing coffee cup that fits in your pocket, (diaper) bag, and much more.

Clever! Karla is using an alternative service called Indiegogo for her fund drive, and she hopes to raise $70,000 by Sept. 11.