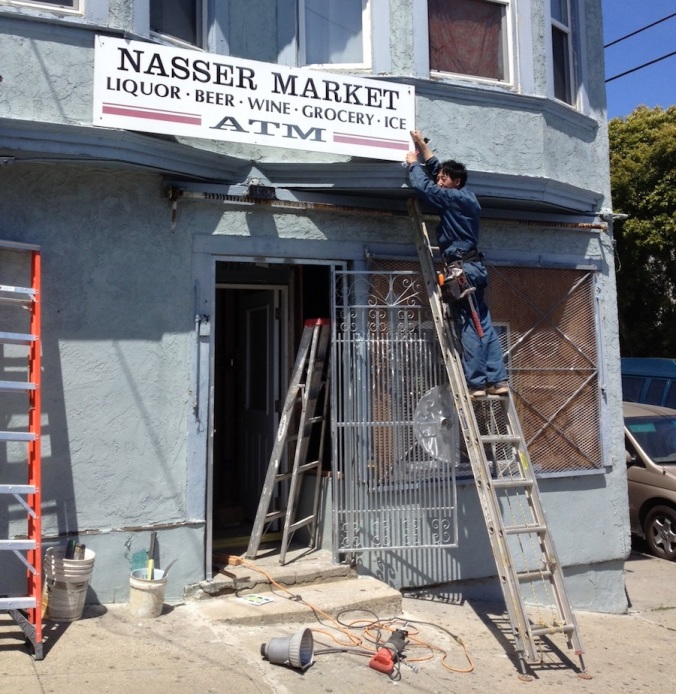 Neighbor Lessley brings us this update on the evolution of the former Nasser Market space on the corner of Crescent and Anderson:

Nasser Market, the infamous Crescent Ave. liquor store that inspired a 2008 murder and served as a drug dealing front, is now gone for good. Vacant for the past several years, the owners finally decided to turn it into an apartment building. As you can see from the picture, the sign came down last Saturday, erasing what had been a shameful blot on South Bernal’s reputation.

For those not familiar with the sordid tale, here are the lowlights: Four years ago owner Tong Van Le was held up at gun point at the seedy market, then tracked down and shot on the doorstep of his house in Novato by six accomplices who didn’t want him to testify in court about the hold up. Next, the market was taken over by drug dealers, who used Nasser as a front for their marijuana operation.

There had been hopes among some neighbors that Nasser might be turned into a small produce market for overflow from the Alemany Farmer’s Market, but these rumored inquiries apparently went nowhere. Instead, a ground level apartment has been carved out if the former storefront, with a familiar Lowes-style vinyl window in front. It’s not particularly pretty, but for the moment it’s a big improvement.