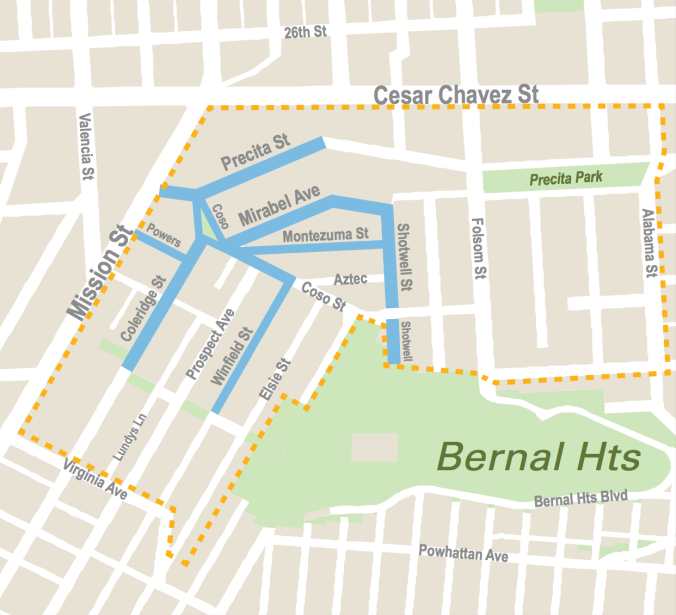 There’s been plenty of confusion surrounding the proposal to create a new Residential Parking Permit (RPP) zone in northwest Bernal Heights.  There’s been a bunch of community meetings, and a petition drive, and yet another community meeting, as well as some controversy surrounding the data the San Francisco Municipal Transportation Agency (SFMTA) uses to determine northwest Bernal qualifies as a new RPP zone.

To create a new Residential Permit Parking Area, a petition signed by at least 250 households (one signature per household) in the proposed area must be submitted to the SFMTA. See “Expand an Existing Permit Area” for petition forms.

Today, however, if you go visit the same SFMTA webpage, the requirements are completely different.

The new requirements are:

To create a new Residential Permit Parking Area, a petition signed by at least 250 households or 50 percent of the residential units in the residential area proposed for designation (one signature per household) must be submitted. See “Expand an Existing Permit Area” for petition forms.

San Francisco’s Transportation Code has specific critera for designating a Residental Parking Permit Area. Per the Transportation Code, in determining whether to recommend that a residential area be designated as a Residental Parking Permit Area, the City Traffic Engineer shall take into account factors which include, but are not limited to the following:

Bernalwood reached out to Hank Willson, Manager of Parking Policy at SFMTA to explain what’s going on. Wilson tells Bernalwood:

The SFMTA is many months into its Residential Parking Evaluation and Reform Project, and that project has revealed some issues with the existing RPP program and process. The timing for North Bernal petition means it is the first entirely new area to be proposed since we’ve started drawing conclusions and formulating potential policies as part of the Reform Project. As it happens (and not unexpectedly), many of the key issues we’ve identified through the Reform Project show up in North Bernal, including:

We are keeping these issues in mind as we analyze the data gathered for North Bernal and hear questions and concerns from neighbors. The Reform Project has proposed potential policy solutions for each of these issues, and we’re currently talking internally to see if any of those proposals would be useful for North Bernal.

You can learn more about the Reform Project here.

OK, so in practical terms then, what does this reform effort mean for Bernal Heights, and the possibility of creating a new northwest Bernal RPP?

Bernalwood sent a series of questions to SFMTA about this, and late last week we received a reply from Kathryn Studwell, SFMTA’s Residential Parking Policy program manager.

Bernalwood: When was the RPP reform project initiated and what SFMTA staff is managing it? Will the public have the opportunity to comment on the proposed rule-changes before the reform proposal in implemented?

SFMTA: The RPP Reform Project started in summer 2014. In the following 12 – 15 months we conducted a comprehensive analysis of existing conditions relative to on-street parking in residential areas. Our project website went live in November 2015 when we began our four-phased public engagement program. I encourage you to visit the site as it has very informative research findings, presentations, and blogs. At this point, we have completed a 3 phase public engagement program involving a citywide household survey, five open houses, 15+ community workshops and meetings, including one workshop in each Supervisorial District, two focus groups and several public presentations. The District 9 community workshop was held on Thursday, May 19th, 2017 at CCSF on Valencia Street.

Bernalwood: It’s still unclear what specific, quantitative criteria SFMTA will use to determine if a proposed new RPP zone will qualify for inclusion in the program. For example, what is the threshold requirement for non-resident cars under the new framework?

SFMTA: We have not completed our evaluation of alternative policy approaches to reforming the RPP program. As you may imagine, any changes to the program impact several departments within SFMTA and we are working with all of them to make sure possible policy changes are both effective in achieving our goals and can be implemented with existing staffing and technologies. One early conclusion, however, is that we want to focus more on comprehensive neighborhood parking management rather than use of a single tool, such as RPP. While some streets are better managed with RPP, others are more suited to general time limits or paid parking. The specific tool used depends on the particular context. So by moving towards a more holistic approach to managing on-street parking, we would not need to use rigid thresholds to determine eligibility for one approach or another.

Bernalwood: So what’s the status of the Bernal Heights RPP now, given that SFMTA appears to have mooted its own requirements for creating a new RPP zone under the auspices of the reform project?

SFMTA: We are completing our analysis of petitions and parking occupancy and are getting ready to schedule another community meeting for later in the spring.

Stay tuned, but in the meantime SFMTA is posting documents and details about the proposed Northwest Bernal RPP Zone on it’s website.