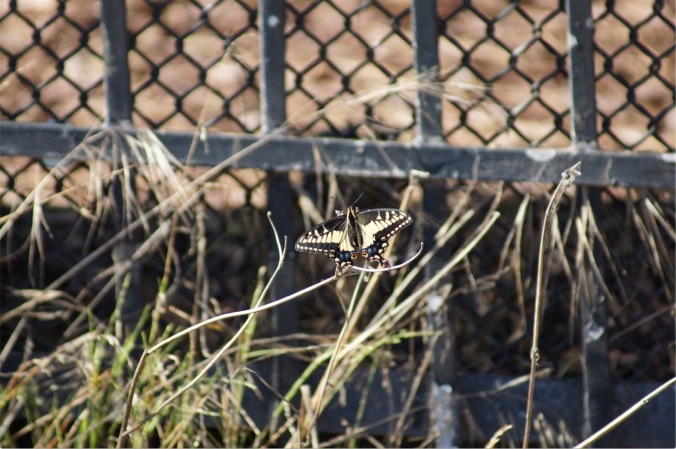 Neighbor Chris did some butterfly spotting atop Bernal Hill recently, and he shared the results of his spottery with Bernalwood:

An Anise Swallowtail butterfly (Papilio zelicaon) pauses and warms its wings in the eighty-degree mid-afternoon heat, against the Sutrito Tower fence.

(NOTE: For best results, try reading the above while wearing a pith helmet and whispering excitedly into a microphone.)

Here’s a close-up of our local specimen:

As for Papilla zelicaon, the Wikipedia sayeth:

Papilio zelicaon, the anise swallowtail, is a common swallowtail butterfly of western North America. Both the upper and lower sides of its wings are black, but the upper wing has a broad yellow stripe across it, which gives the butterfly an overall yellow appearance. There are striking blue spots on the rear edge of the rear wing, and the characteristic tails of the swallowtails. Its wingspan is 52–80 mm. Its body is somewhat shorter than the rather similar western tiger swallowtail, with which its range overlaps; it also lacks the black stripes, converging toward the tail, of the latter […]

The anise swallowtail is a butterfly of fairly open country, and is most likely to be seen on bare hills or mountains, in fields or at the roadside. It is often seen in towns, in gardens or vacant lots.

The usual range of the anise swallowtail extends from British Columbia and North Dakota at its northern extreme, south to the Baja California Peninsula and other parts of Mexico. It is occasionally reported from the southeastern United States, but its normal range does not extend east of New Mexico. In all the more northerly parts of the range, the chrysalis hibernates.

One thought on “Get to Know This Butterfly, Photographed Atop Bernal Hill”