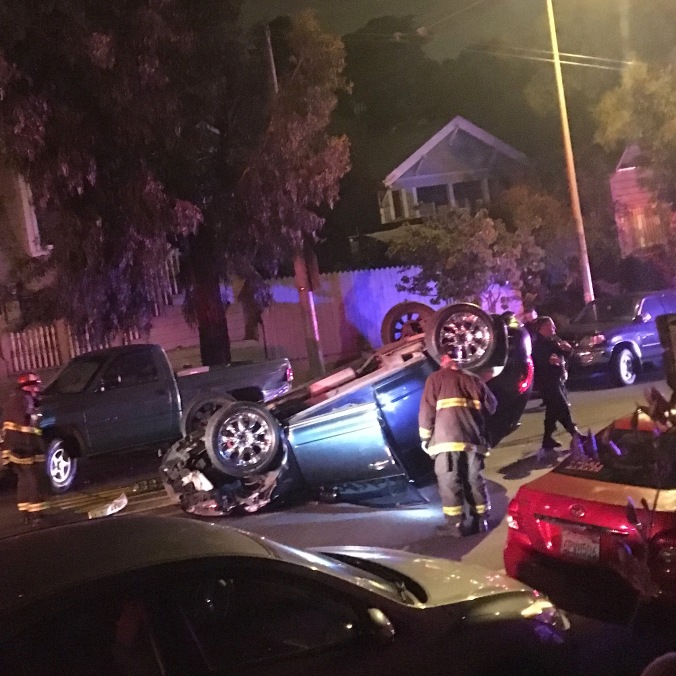 There was a crazy car accident on Cortland between Elsie and Winfield last night at about 11:40pm. We heard the crash and ran outside to see if anyone was injured, but the driver had fled already!

I don’t know how that was possible in what was about 15 seconds from hearing the crash to seeing the car. I think someone was gunning down Cortland and flipped the car with the front hood crashing into the street and the car landing on its top. It took over an hour for the police/fire to clear the scene.

Thankfully no one else was on the road at the same time.

UPDATE 10:00 pm. Over on the Facebook, Neighbor Kristine shared more details about the incident, and the driver of the car:

This happened almost literally outside my bedroom window.

I scrambled to the window after hearing 3-4 smaller crash sounds and then the big final one. I saw the fellow emerge from the drivers side door and amble off. I’m sure he was in shock, but there’s no way he was not also drunk with the way he was moving his body. with determination he wandered (“run” is much too generous”) up Windfield, clearly abandoning the scene.

Neighbors were already gathering at the time and a fellow was trying to talk to him and ask him questions. it wasn’t even obvious at first that he was “fleeing” because he was moving so slowly. the neighbor was distracted by the intensity of seeing the car upside down and the driver kept walking/jogging/skipping.

it was about a minute later that the various neighbors helped the passenger get out of the car. I clearly heard him say that he didn’t know the driver, they had just met and he’d simply accepted his offer of a ride. he gestured west, downhill toward Mission St, as where they had met and had been coming from. I’m sure he was also in shock, but he was surely inebriated as well.

There was a truck parked on Cortland that was hit and leaking gas. I didn’t see the crash itself, but it’s amazing that the driver was able to damage a parked car to his right while also still having enough momentum to completely flip his own vehicle upside down.

I am SO grateful that myself nor another cyclist didn’t happen to be riding on Cortland at the time. I hope this incredibly reckless individual is caught and thoroughly prosecuted.