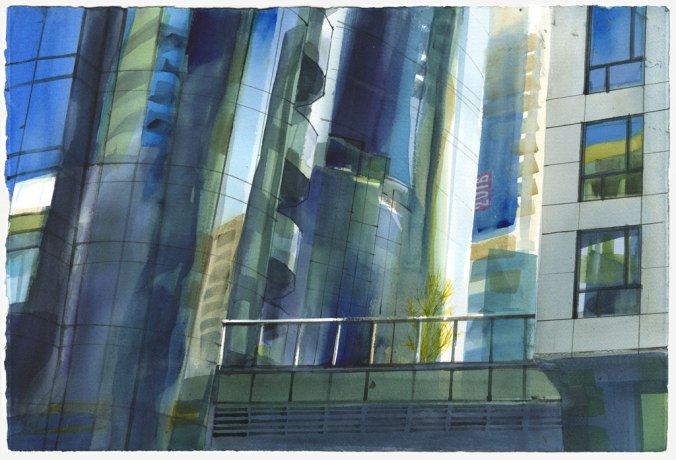 Bernal neighbor Laurie Wigham is an artist who leads our local watercolor tribe. She often paints pictures of scenes captured around Bernal Heights, but this month she is displaying work that shows other parts of Our Faire City.

I’m showing some of my work at a gallery in the Spark Arts Gallery (4229 18th St.) in the Castro. The show is “The Changing City: Painting San Francisco’s Changing Identity,” and it will be on display until April 28. The opening reception happens on Thursday, April 7 from 7-8:30 pm.

Throughout its history San Francisco has always been reimagining itself and trying on new identities. But right now there is a lot of bitterness and anger at how the influx of new tech wealth is rapidly remaking the city and displacing so many of the long-term residents (including the artists).

I thought it would be interesting to organize a series of sketching meetups in the areas which are changing most rapidly and to see if the process of sitting down to sketch the changes would make it possible for us to think more clearly about what’s happening. So far I don’t feel that I’ve had any great insights, but it’s been a good thing to be still and think while I draw. Here are a few of the sketches I’ve done.

Mission Bay: Until recently this old industrial waterfront area was mostly fields of weeds and rubble around scattered old warehouses. Overnight it seems to have filled up with blocks of gleaming medical research facilities, high tech businesses and luxury condos.

The Mission: This flat area in the southeast part of the city has traditionally been working class—Latino for the last half century, Irish before that. Many blocks like this one are still full of taquerias, murals and graffiti in colors that came from some warmer tropical place. But the Mission is turning into hipster central, and I did this sketch sitting in a new cafe and sipping a $5 single-source pour-over coffee. 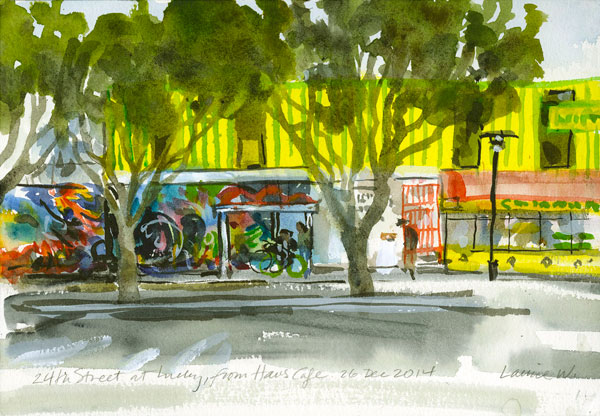 The corner building below is still boarded up after a fire last January which killed one man and left 58 homeless. It was ruled an accidental fire, but there have been so many fires in the Mission this year, each one displacing more long-term low income residents and opening up valuable real estate for developers to build more luxury condos. The new condo building next to it, in bright yellows and oranges, seems to have been thoughtfully developed in many ways, and the New Mission movie theater next to it has been restored and reopened after decades sitting derelict, so maybe not all the change is bad. But every time I sit down to sketch in that area, people stop to tell me their stories about they or someone they’re close to has had to move. 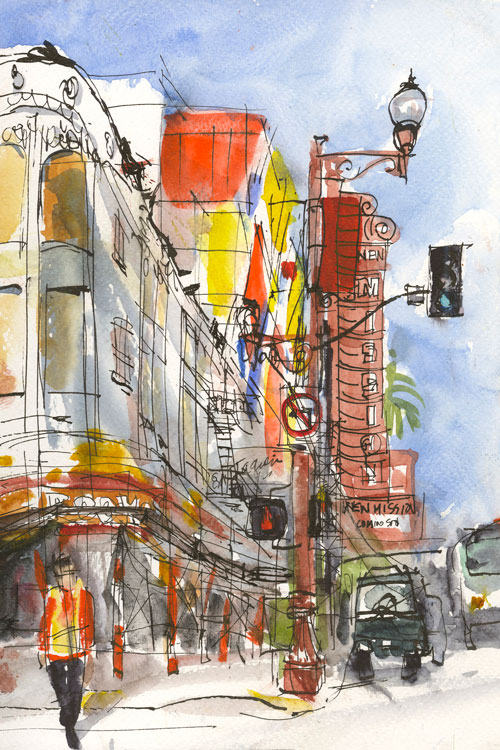 Here’s the detail on the show: 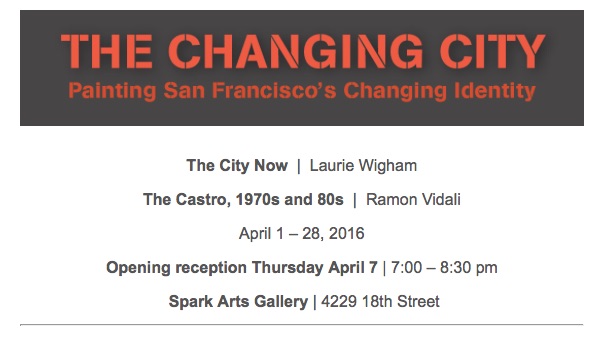