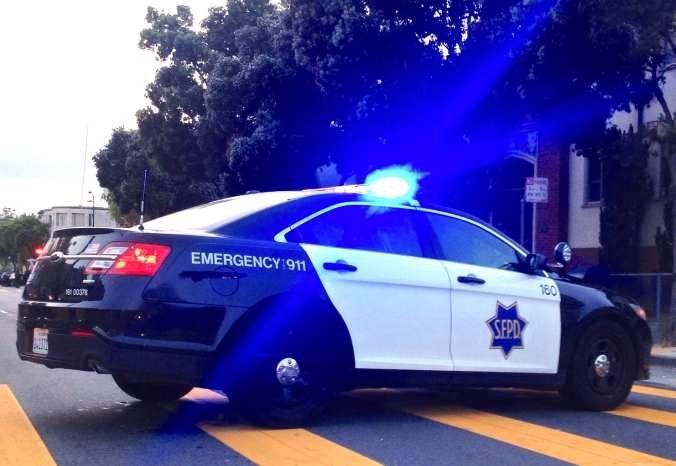 It’s a new year, with new data on local crime patterns. So for that, let’s go to Bernal’s valiant SFPD liaisons, Neighbors Edie and Sarah, who attended the most recent Ingleside Police District Monthly Community Meeting, held just before the holiday break. Over to you, Neighbor Edie…

Captain’s Report by Captain Joseph McFadden: joseph.mcfadden@sfgov.org
(Notes taken by volunteer Edie Williams, who is entirely responsible for any errors)

Bernal Heights has been seeing a lot of nefarious activity, due to the city’s attempt to push homeless residents away from the area of the Super Bowl, and thanks our easy access on and off the freeways at Bayshore / Cesar Chavez or Bayshore / Alemany.

Large encampments of homeless people are located at Highland Bridge and under the freeway at Cesar Chavez, with tents, bikes, and cardboard packaging (which police believe may have originally been packages stolen off neighbors’ porches.) There’s a SPFD lieutenant in charge of homelessness, and police are issuing citations for homelessness, but the courts are not putting them in the system, and there’s no place to put people in treatment if they were in the system–no treatment beds available, and way too many people waiting for them already.

Teens have been hanging out and partying in the area near the encampments, and in December there was a gang-related shooting on Holladay at Peralta. This may have been a setup, since the Norteño gang seems to be fighting even among themselves. What to do: The Captain asks that if you see any teen party or gang activity, call police dispatch immediately and ask for them to come check it out. If there’s no response, call the Ingleside station main number, (415) 404-4000, ask to speak to the PC-Platoon Commander, and tell them you’re still waiting for a police response.

Shooting of Mario Woods in the Bayview has generated a great deal of controversy, especially after the publication of video taken at the time of his death. The Captain believes that tasers would enable police to escalate force without killing the person involved, although tasers don’t always work, as they have to make contact with two points of skin to have impact. While the use of tasers is being discussed, the police have been issued shields for self protection.

Body cameras are coming, though not at the beginning of 2016. Police are currently developing protocols and policies for the circumstances police will wear the cameras, whether filming will include audio and visual or just visual, and how and where the data will be stored and used. They will then set up a pilot program in the BayView, Ingleside, Tenderloin, and the Mission. They must evaluate cameras, select a vendor, and then plan for ongoing future expenses for data storage and updating, etc.

The Ingleside has license plate readers on two patrol cars, which they’ve used to identify several stolen cars and arrest the drivers.

McLaren Park has seen a crowd of neighborhood motorcross bike riders ride through the park. There’s also a large group from Oakland that comes to SF and rides around the neighborhoods. Many are juveniles, they don’t wear helmets, and police believe it might be more dangerous to chase them and have them get hurt than not. Leaders in Viz Valley are identifying kids with bikes, and police will be notifying the families that if the kids are caught they’ll take away the bikes. What to do? Call the police if you see them start up, so the police can stop them before they’re out of control.

The “Wig bandit,” known for wandering through the upper Noe casing houses, was caught within a few hours once videos of him were on the news. Unfortunately, one resident chased him out of their house, but never called the police. He did report it on NextDoor, however. Please remember, Police are not monitoring NextDoor for calls for assistance. If you are the victim of or witness to a crime or potential crime, call the police directly before you post to social media. Contact phone numbers are below (and in the Bernalwood sidebar)

Videos are used frequently now as tools to help victims, witnesses, and the police. If you have installed a video camera, you can register it online with the SF District Attorney. The DA’s office will map the addresses into a database, so that when a crime is committed, the police can check the map, ask camera owners for a copy of their video, and possibly use the video as evidence in a trial. If you’re thinking of buying a video camera, the Captain recommends that you buy one that has a high enough resolution to convince a jury. Many cameras come with a 7-day loop, so have extra CDs and learn how to download the video.

Neighbors report groups are gathering and lighting bonfires behind Pacific Super off Alemany. Police will investigate.

If you notice daily repeat traffic problems, email a description of them to the Captain. He’ll set up enforcement campaigns.

Monthly meetings are held the third Thursday of the month in the Ingleside Police Station meeting room, then the following month at a changing neighborhood site. If you have any suggestions for meeting areas (with some parking) within the Ingleside community, please let the captain know.

17 thoughts on “Your Bernal Heights Crime Update for January 2016”