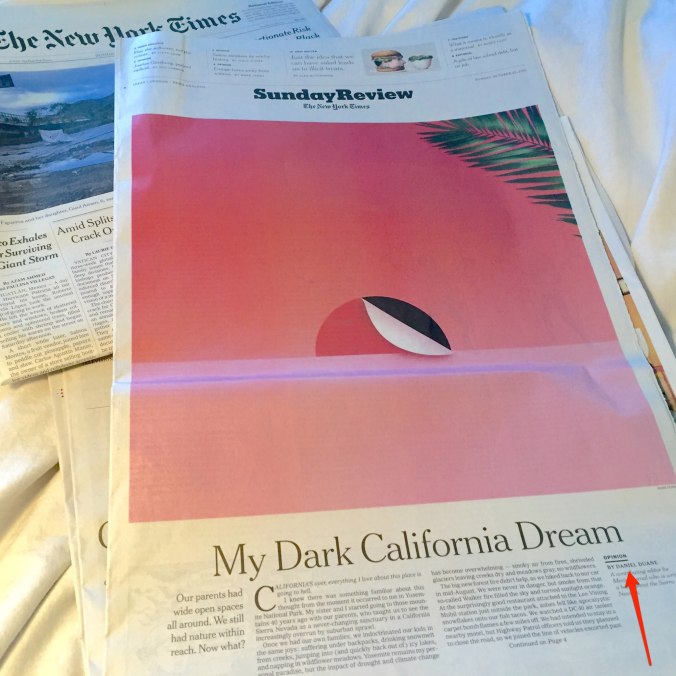 In case you missed it over the weekend, Bernal neighbor Dan Duane had a very prominent, very thoughtful piece about the fate of the California Dream on the front page of the Sunday Review section in Sunday’s New York Times.

All over Northern California, there is a profound mood of loss: Oakland, long a bastion of African-American cultural life, has seen housing rental rates jump 20 percent this past year; San Francisco’s lesbian bars are closing, and the Castro gets less gay by the year.

Then there’s the shock of raising kids with public schools ranked among the worst in the nation, and public universities that have more than doubled in cost since 2007. Most of my outdoor pleasures are still available, but it’s getting scary with the desertification of subalpine ecosystems, Sierra snowpack at a historic low, as much as 20 percent of California’s once-majestic forests at risk of dying, and freeway traffic so ubiquitous that it can be soul-destroying just getting out of town to see all this stuff.

The real estate market, in the meantime, has become so bizarre that my funky little neighborhood is already beyond the reach of young doctors and lawyers — techies only need apply.

This may sound like the stuff of yet another nostalgic lament about the unsettling pace of change in California, but Neighbor Dan is too self-aware to fall into that dead-end trap; He knows people have been writing “California is over” essays for as long as there’s been a California.

Instead, he comes to a more nuanced realization: that the same dyanamism that makes California so unique is also what makes it so heartbreaking. As Dan puts it, “California has been changing so fast for so long that every new generation gets to experience both a fresh version of the California dream and, typically by late middle-age, its painful death.”

Oh, also, Star Sighting!!! As destiny would have it, Bernalwood ran into Neighbor Dan on Sunday afternoon on the other side of town. We’d read his essay in the morning, so it was a locavore privilege to be able give him a big Bernal high five-later that same day:

If you see Neighbor Dan out and about, we encourage you do the same.