Perhaps you have seen these around? I am always a little suspicious about things like this with no email address or URL, and I can’t find anything online when I search Northeast Bernal Parking Alliance. Which leads me to believe this is the work of one irate neighbor who is about to ruin things for all of us. My opinion: While I’ve noticed some parking problems, notably neighbors leaving their cars in the same spot for weeks or months on end, people need to realize that once you call in the DPT – there is no undo. Sure one person from Google might get a ticket, but once the DPT begins patrolling the streets and marking up cars, we the residents will get the bulk of the tickets. Nearly every driveway on my street sports at least 20 cars that are parked in driveways and are kind of sort of a little bit blocking the sidewalk. Ticket! When we go away and have relatives housesit? Ticket! A friend from another neighborhood coming by for lunch and a long walk? Can’t park here! I lived in the Mission prior to Bernal and residents fought to get two hour parking on our street and I didn’t think much about it – until I realized my car was registered in San Mateo, not San Francisco, and I couldn’t get a permit. It was a huge pain for me, and all the things I mentioned above happened. It is not worth it. It is already illegal to park for more than 72 hours and that takes care of the big problems. People parking for the day? Shrug. In many cases it is merely an exchange. I leave and drive to work and someone takes my place, leaves at the end of the day and I take it back. It’s okay. I’ll go to this meeting but I urge people to consider what it means when the DPT starts patrolling. YOU get the ticket, not some imaginary bus riding tech worker from the Marina.

Hmmm. We do wonder: Why does the graphic on the handbill include so many question marks? Who is the “Northeast Bernal Parking Alliance?” Who are they allied with? Is this another one of those Ron Conway organizations that seeks to further gentrify San Francisco? Or is it instead the leading edge of yet another imperialist Calle24 plot to annex North Bernal and transform it into a private parking preserve? To get answers to these and other questions, attend the meeting tonight: 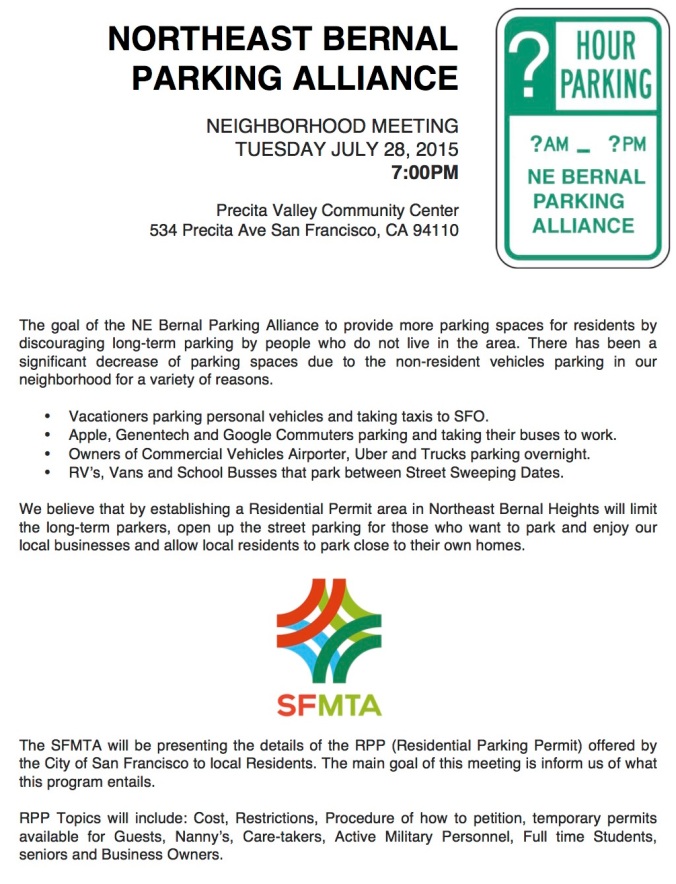