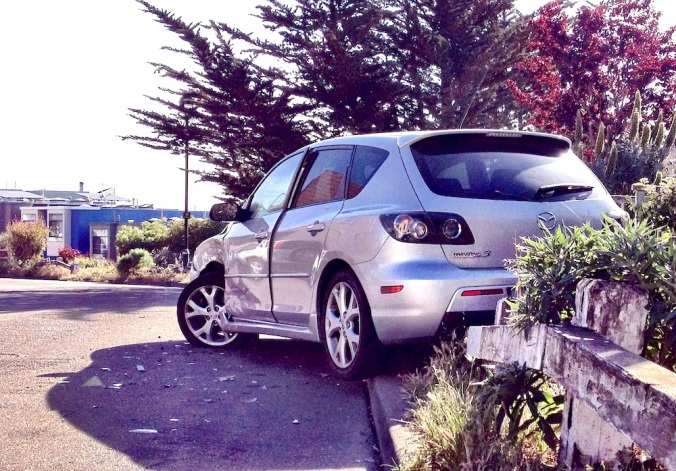 Neighbor Mason captured these photos this morning on Franconia where it turns into Esmeralda; they document what may be the the most unsuccessful parking effort ever seen on the upper reaches of Bernal Heights.

Ken Block spent the night in Bernal, and resorted to some gymkhana inspired parking techniques.

That can’t be, however, because Ken Block would have pulled it off successfully.

In fact, it looks like the parked car may have been hit by another passing vehicle, which is actually rather sad.

UPDATE: It was indeed an accident, and confirmed as sad. Neighbor Benjamin writes to say it was a bad one:

The car was indeed hit by another car at about 7:45 PM last night.  I didn’t witness the accident, although I heard it – loud crash.  I took the attached photo a few minutes after the accident. The driver appeared hurt, though I don’t know how badly.  I waited until the police arrived.

Actually, a young man (21 years old) was completely intoxicated and drove up Franconia at a high rate of speed, did not negotiate the curve, hit this poor Mazda, then slammed his own car into the curb on the corner.  He tried to run away because he was so drunk, he couldn’t even stand up.  Thankfully, several neighbors ran to help me keep the guy lying on the ground until police and paramedics arrived.  He is in big trouble, that one.