You’ve seen it. You love it. Maybe you’ve even walked it. The stone labyrinth in the old quarry site on the southwest corner of Bernal Hill is a charming neighborhood treasure. It tends to morph over time, but the Bernal Labyrinth is always well-maintained — even if no one knows who does all the morphing and maintaining.

Yet who created the Bernal Labyrinth in the first place? That’s suddenly become a topical question, because an article in the San Francisco Examiner last Monday told a rather distressing tale about how the labyrinth allegedly got its start:

It turns out the locally respected labyrinth in Bernal Heights is the brainchild of a man accused of stalking a woman, according to authorities.

Self-proclaimed artist Cesar Lopez, 34, of San Francisco is charged with one felony count of stalking in connection with a December incident in which he allegedly invited a woman to the labyrinth on Bernal Heights Boulevard in order to conduct a “cleansing ceremony.”

When they met 10 years ago, prosecutors said, Lopez agreed to tutor the girl in Spanish at the Mission Branch Library and she reportedly agreed to teach him English.

About two years later, the girl reportedly wanted to sever the relationship when Lopez became romantically interested. But Lopez allegedly carried on a one-sided relationship for the next eight years, sending letters and creating a rambling blog in order to communicate with her, prosecutors said.

He also apparently built the labyrinth near the woman’s home using stones from Bernal Hill. At one point, prosecutors said, he sent the woman a picture of a labyrinth “in the obvious image of her face” — it even included her glasses. He has since taken down that labyrinth.

But one design remains, and it is revered by neighbors.

According to labyrinthlocator.com, the Bernal Heights piece was built anonymously in August 2008.

“We don’t know who started it,” the website says, “but people are keeping it up and walking it daily.”

Yuck. Gross. Ewwwww. The Examiner story (and this similar piece from KPIX-TV) tells us that our lovely Bernal Labyrinth was in fact built by a Cesar Lopez, a sleazeball who used it as bait to seduce ladies. But should we believe them?

Fortunately, we have reason to think this untrue. Indeed, your Bernalwood Action News Investigative Team is convinced that Cesar Lopez did not, in fact, create the Bernal Labyrinth.

Instead, our evidence indicates the original labyrinth was created by Mr. Lars Howlett, a former Bernal neighbor. A committed labyrinth devotee, Lars is a Veriditas Certified Labyrinth Facilitator (???!),  who has even self-published a book on the subject. In other words: Impeccable credentials.

Coincidentally (for those of you who believe in coincidence), Lars posted about the Bernal Labyrinth on the very same day that the Examiner’s article about Cesar Lopes first appeared. 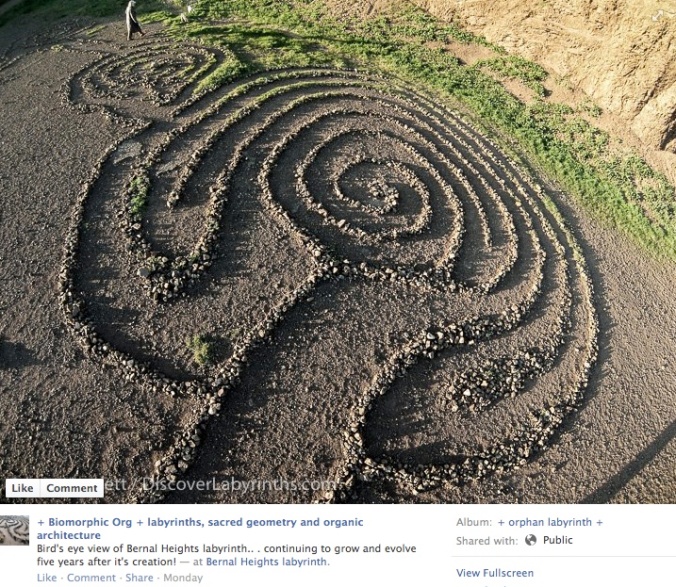 Lars’s post was intercepted by analysts from the Bernalwood Office of Neighborhood Signals Intelligence, and a dialog with him was initiated. He told us:

I created it on May 10th, 2008, first as a three circuit classical design. I call it the Orphan Labyrinth because I soon moved away from San Francisco and ever since it has taken on a life of its own!

Even better, he had a photo of the Bernal/Orphan Labyrinth taken on May 10, 2008 — three months before Cesar Lopez claimed to have created it — which shows what the labyrinth looked like as a wee little baby:

Bernalwood asked Former Neighbor Lars to tell us more about the making of the Bernal/Orphan Labyrinth:

One afternoon on May 10th, 2008, I found a scattered circle of rocks near the overlook at Bernal Heights where I was taking pictures. In half an hour I arranged a simple labyrinth and climbed up to photograph the first person to encounter it. I left for the summer and moved that fall to Half Moon Bay. A year later I returned and was surprised to find the path had grown twice its size!

I visit when I can and, if need be, provide some loving care, but mostly this labyrinth continues to leads a life of its own. I have documented it’s evolution through photography and have come to know it as the ‘Orphan Labyrinth.’

Almost five years later, the labyrinth continues to grow and evolve. There have been deviated paths to a peace sign and a heart created by others. I have walked the path with Lauren Artress (also a Bernal Heights community member) who brought the Chartres labyrinth to Grace Cathedral. I became a certified labyrinth facilitator studying with her in France and am now the apprentice to master builder, Robert Ferre.

I continue to design, build and walk labyrinths including my most recent project, the Labyrinth of Wisdom at Sofia University in Palo Alto. Other installations are temporary, such as the Literal Labyrinth made of books I created this summer at City Hall for the San Francisco Poetry Festival.

People use labyrinths for walking meditation, prayer, problem solving, healing, and finding peace. The Orphan Labyrinth at Bernal Heights is the oldest surviving labyrinth that I’ve built. I’m happy that the community has cared for it and helped it along the way.

When you weigh all the data, Lars Howlett has a pretty compelling claim on the creation of the labyrinth — unlike the hapless Cesar Lopez, who enjoys a fantasy life so rich that it earned him an arrest and criminal trial.

So with that, we will leave you with two videos: Lars Howlett made this first one; a video about creating and walking a labyrinth on a beach in Marin:

… and Bernalwood created the second; it shows our intrepid Cub Reporter finding enlightenment in the labyrinth Lars originally created on Bernal Hill:

PHOTOS: Top, The Bernal/Orphan Labyrinth in December 2012, by Dr. Lapin; below, by Telstar Logistics in December 2010. All other photos by Lars Howlett.

6 thoughts on “Who Really Created the Fabulous Labyrinth on Bernal Hill?”