While rained in Bernal Heights last week, it snowed hard in Lake Tahoe — so much so that some ski resorts got more than 100″ of snow. It was cold here, too, so snow even fell on nearby Mt. Tam and Mt. Diablo. But when I climbed to the top of Bernal Hill on Sunday, there was no snow to ski on, and that made me sad.

It’s too bad, because (as I’ve argued before), with a few feet of snow piled on top, Bernal Hill could deliver some epic rides. Indeed, as I looked down from Bernal, I began to visualize what it would look like after a big dump, and which lines would offer the best runs. And then — NIMBYs be damned! — I began to envision how to turn Bernal Hill into San Francisco’s premier destination ski resort.

Highlights of my proposal include:

Two High-Speed Chairifts: The Stoneman Chair, which zips up Bernal’s northwest corner from the foot of the hill near Coso Street, provides unparalleled access to the mountain’s advanced terrain. For beginners and intermediates, the Vista Pointe Chair carries kids of all ages up the gentle slopes of Ski Bernalwood’s eastern face.

Xtreme Terrain: Ski Bernalwood has the vertical drops that will keep adrenaline junkies coming back for more.

14 Limited is the mountain’s longest and most challenging run. A steep plunge down Bernal’s northwest face, the ride is as intense as the MUNI bus line from which it takes its name. The line down 14L takes you off the nose at the top of the hill, shooting you through the tree glade below the former roadbed and all the way down to the base of the Stoneman Chair.

Here’s the view from the top of 14 Limited: 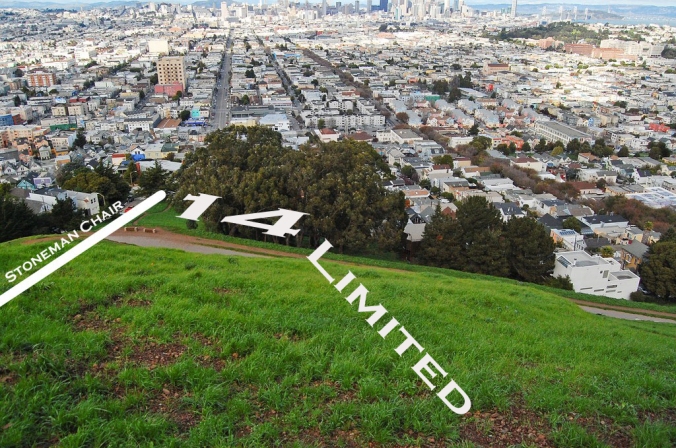 Cornelio’s Folly, named after Jose Cornelio Bernal, is home to the Ski Bernalwood Air Force. A rock-faced cornice on the hill’s south face, Cornelio’s Folly drops into a perfectly sloped landing zone that makes it ideal terrain for hucking backflips.

Summit Lodge, Restaurant, and Cocktail Lounge: With only modest modification, the microwave antenna control facility atop Bernal Hill could be converted into an alpine lodge and eatery with commanding views of the surrounding cityscape. I propose outsourcing food services to Baby Blues BBQ and Emmy’s Spaghetti Shack, while recruiting Royal Cuckoo to operate the bar.

There’s an old saying: “When hell freezes over, I’ll ski that too.” With an investment of just a few million dollars, Bernalwood can be ready whenever that finally happens.

UPDATE: According to the San Francisco Chronicle, it really could snow in San Francisco this coming weekend! Contact Bernalwood to pre-purchase your lift tickets, and we’ll see you at the summit of 14 Limited.